During the late 60s and early 70s, a series of Italian-made genre films focusing on extravagant, deeply intertwined murder mysteries, known as Giallo, became a hugely popular and profitable export from the country. Director Kuei Chih-hung, fresh off his first of several black magic gross-outs, was apparently so impressed with the genre he transported the style to Hong Kong, added grime and some chop-socky kung-fu to make this bizarre, enjoyable effort for the Shaw Brothers studio. 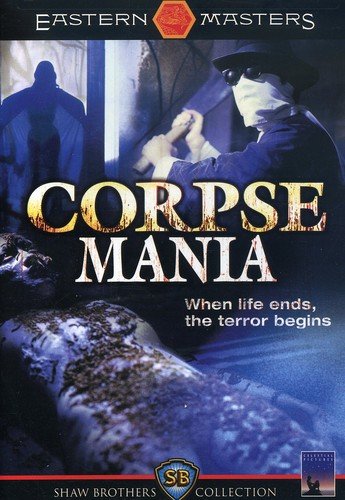 After a body’s discovered in an apartment, Police Inspector Zhang (Jung Wang, from “Bastard Swordsman”) looks over the report and notes the similarities in the case to a similar report in a neighboring village. Arriving in Foshan, he comes across Madam Lan (Ni Tian, from “Hex”) the owner of a local whorehouse who is having to force Yan-erh (Yu Tsui Ling, from “Dirty Ho”) to deal with the more troublesome girls in her employ. After a series of gruesome murders are committed around the grounds of the brothel, he steps up the process to bring the killer to justice when the killing spree starts getting more vicious with targeting the girls around Madam Lan’s, after a suspected necrophile, Li Chengyuan (Erik Chan) is released from an asylum. Determined to put an end to the proceedings, Inspector Zhang tries to make sense of the numerous twists in the case before the killer can strike again.

Overall, ‘Corpse Mania’ has plenty to recommend it. The movie’s at its best when dealing with the abundant and grimy sleaze packed into it, courtesy of writers On Sze-to and director Chih-hung. The very nature of a killer running around defiling bodies and committing necrophilic acts on those bodies is quite unsettling from the very start, and doing as many detailed shots of the body’s being examined while absolutely crawling with maggots and worms is absolutely revolting. That the girls are nude in this manner while covered in such a nausea-inducing state makes for a queasy experience which is suitably matched by the scenes caressing the naked bodies in the morgue in an almost orgasmic manner to really get an uneasy feeling about the material present. The extended close-ups and panning shots along the body showing the insects crawling out of the orifices or simply congealed on the various points present with the rotting, desiccated skin underneath create even more disgust and grime. These scenes help to provide the appropriately dirty air throughout, with the revolting concept being equaled by their realistic execution.

Another suitably strong aspect here is the melding of the grimy atmosphere with Sze-to and Chih-hung’s storyline. The inclusion of elements from the Giallo and krimi genres, especially Zhang’s dominance of the first half conducting an investigation into the crimes and setting the events around a whorehouse play major roles in the film. As well, with the build-up early on about the gag-inducing smell from the neighborhood apartment setting off the mysterious killer in a traditional Giallo attire, the black fedora, black trenchcoat and white mask covering their face manage to bring even more elements from that genre. These early scenes set the stage for the later half to turn into a rather enjoyable slasher effort with a more pronounced effort towards scenes of the killer stalking and knocking off victims, which are also prominently featured in these films. From the first attack on the security guard on patrol to the excellent ambush inside a car outside the whorehouse and then the big dual attack at the chicken farm nearby that offers two different attacks inside, there’s plenty of strong action scenes throughout here. With the finale taking place in the upper realms of the whorehouse with a fun attack and chase scene giving this one lot of great gore and fun at the ending, these manage to hold it up rather nicely.

There are a few minor issues with ‘Corpse Mania.’ The biggest problem to be had is the rather flat and sedate pacing that runs throughout the first half, as the scenes not focusing on Zhang’s investigation tend to be quite bland with the focus on Madam Lan’s whorehouse. These scenes aren’t in the least bit interesting. Watching how they entertain guests, the behind-the-scenes struggles trying to keep the sickly performer healthy and the various bits of comic relief trying to get inside the building don’t have much of any interest. This is due to dropping the necrophile angle in favor of these investigations singling out the individual we all know is the killer. That aspect also manages to hold the later half back since the main focus turns away from these aspects to the slasher scenes and investigations. With the revelations and double-crosses in this section emerging into far more convoluted scenarios than necessary, this half of the film is a lot more underwhelming than it really should be.

While ‘Corpse Mania’ does have some issues with the pacing and a convoluted storyline, there’s more than enough to like with its slasher scenes and a grimy atmosphere. Give this one a shot if you’re a Giallo fan into looking for a new country that produced genre fare or an extreme exploitation fan, while those not willing to look at the material present should avoid this one.