A tradition going back centuries, countless stories of objects, most notably books and other dark tomes, have been claimed to be made of human skin, a practice that was reportedly accomplished by Ed Gein who made a lampshade of human skin. However, the real-life inspirations for such gruesome antics might not have been at the center of planning for this gruesome kung-fu/horror hybrid from the Shaw Brothers. 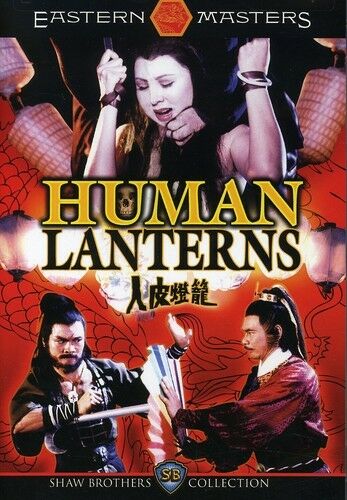 Attending a famous celebration in the town, Lung (Tony Liu, from “Way of the Dragon”) and his wife Jin (Ni Tien, from “Corpse Mania”) are shocked when village head Tan (Kuan Tai Chen, from “Executioners from Shaolin”) uses the opportunity to embarrass him. After introducing the prostitute Yen-chu (Linda Chu, from “The Duel of the Century”) which Lung had an affair with, he vows to get his revenge at the village’s local lantern-making contest. His rage at winning, forces him to turn to old rival Chun-fang (Lo Lieh, from “The Dragon Missile) for help in crafting the perfect lantern. While Lung and Tan continue their feud against each other, a series of mysterious murders occur around the village that each one points to the other as committing, and when it soon dawns on Lung and Tan who is really responsible for the murders, they decide to put their mission aside to stop the madman.

Overall, there’s quite a lot to like with ‘Human Lanterns.’ One of the greatest aspects present is I Kuang and Chung’s breakneck story. The film moves along at a great pace and keeping things interesting. Right away, we get the initial setup at the village banquet showing Lung and Tan’s disdain for each other and the desire to win the lantern contest, forcing him to turn to arch-rival Chun-fang to win the competition. As well, the tyrannical control Lung has over the prostitutes in the brothel and the jealousy that governs his decisions plays into the continuing nature of the feud, lasting throughout the film with each one looking to one-up and humiliate the other. Once they come to realize they’ve been set up and that everything has been turning them against each other, the story comes together with a surprisingly strong resolution.

Another big positive is the mixture of horror and kung-fu in the film. Though not filled to the brim with such material as is to be expected, the fighting comes off quite impressive and exciting due to choreographer Chia Tang. The inclusion of the killer’s abilities in martial arts adds quite a lot to the abduction scenes as the sight of him dressed as a monkey complete with a skeletal animal mask take on a far more eerie quality than expected. This is found in the daytime ambush in the woods where the sight of that running around and flipping off tree-branches is quite creepy. The best, though, are the brawls between Lung and Tan which they continually find themselves in, and by taking place within eateries, the courtyards of their houses and out in the streets of the village, the action carries along quite nicely. Even odd interstitial elements like fighting off assassins or seeing the killer take out a squad of random henchmen to set up their suspicions are rather fun, and the extended brawl at the end includes some really fine stunt-work and swordplay included in the hard-hitting fights.

As well, when the film really lets loose with its grotesque elements, it becomes quite enjoyable. The first stalking in the brothel as well as the subsequent defleshing of the victim is exceptionally graphic and gruesome, courtesy of Wu Hsu-ching’s special effects. The visual of the skin being sliced open and ripped from the still-alive victim in one piece creates an awfully striking visual, and when done in conjunction with the underground caverns and the various tools shown lying around to be utilized later on, completes the grimy illusion. Likewise, the various interludes going back to the location showing how the pieces of stretched skin are being made into the lantern itself offers up the kind of unease associated with such a lair. Seeing the area dressed in entrails, dismembered body parts, drying skin pieces and bloodstained equipment creates a truly grotesque atmosphere alongside the graphic acts themselves. This creates a lot to really like in the film.

However, there are some big problems here. The biggest issue is the central premise of the film in that there’s no adequate explanation for the lantern festival to be the big comeuppance in Lung and Tan’s rivalry. Why Lung needs to commission a lantern to appear at the festival in order to get the last-laugh at Tan makes no sense, nor is there anything given as to what’s going to happen if the true creator of the lantern is revealed. Being that this is the main driving point of the film as for why Lung got together with Chun-fang to put their differences aside to make the lantern for the festival, not making this piece make sense is all the more troubling. Likewise, the fact that the investigation should’ve lead the guards right to Chun-fang without much difficulty speaks to a haphazard investigation method simply to keep the movie going and get Sun Chien’s character into the movie. These elements do manage to bring the film down.

A rather fun and highly enjoyable mixture of kung-fu and horror, ‘Human Lanterns’ manages to get both elements right often enough to be one of the more enjoyable efforts in the style. Definitely give this a chance if you’re into the studio’s genre output or looking for either gory kung-fu or martial arts-packed horror, while those that don’t get either one should heed caution.