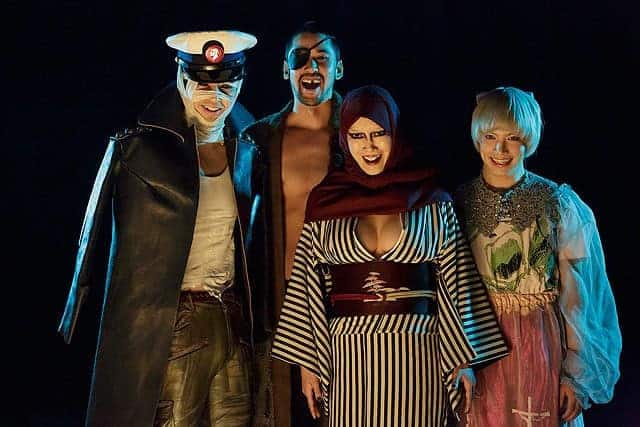 The film is based on the ero guro manga by Suehiro Maruo, which circulated in 1984 and was previously adapted in an anime film, in 1992, titled “Midori”.

The story revolves around 14-years-old Midori, an orphan who is picked by the Aka Neko circus troup. The other members include Kanabun, a seemingly cute transvestite who harbors a truly dark side, as he has no issue in killing two puppies with his heels in order to cook them for the troupe. Muchisute is a man with no arms filled with bandages, who is capable of doing everything with his legs, including shooting a bow. The rest of the members are a brute who swallows swords, a sultry woman named Kojiro Arashi and two utterly peculiar creatures of unknown origin. All of them seem to bully Midori, occasionally becoming violent towards her, even blaming her for the commercial failures the circus is experiencing. Everything changes however, when Wonder Masamitsu, a magician/hypnotist enters the troupe and takes a liking to Midori. At the beginning of his presence, everything seem to get better for all the members of the circus, but soon, Masamitsu shows his true self.

Torico presents a version of the original that entails much gore, but is less violent. The splatter and erotic/sadistic episodes are still here, fueled by the preposterous, both in appearance and behaviour, characters, but the element that dominates is definitely the peculiarity, instigated by the extreme colors that fill the screen constantly, creating an utterly kitsch world. In that aspect, both Takeshi Sone in the cinematography and Kumiko Takeda in the costume design department have done a wonderful job, presenting a visual extravaganza that fits the general aesthetics of the film perfectly, since most of the story takes place in a circus.

All of the above result in the film functioning as a preposterous anime at times, where image, through the prism of ero guro, is everything, and coherence is something frequently neglected. This sense is heightened by the occasional animated sequences that appear randomly during the film. Torico even managed to include a social comment in there, regarding the corruption of authority, which even extends to the pariahs of society the members of the troupe are.

The acting seems to follow the same rules. Risa Nakamura looks utterly cute and constantly perplexed as Midori, Takeru is great as the sadistic transvestite Kanabun and Shunsuke Kazama makes for a great villain as Wonder Masamitsu, in a world where no one seems to be good, apart from innocent Midori. Legendary Mame Yamada as one of the two strange creatures infuses the film with a distinct cult aura.

“Midori: The Camellia Girl” offers an extremely colorful take on the ero guro theme, which results in a combination of gore, erotica and bizarreness, that both fans of splatter and Japanese curio will adore.