The theme of monsters in the Joseon has become a trend lately, with films like “Rampant” and series like “Kingdom” bringing zombies to the particular era. In the case of “Monstrum”, the zombies have given their place to a monster and a story that reminded me much of “Brotherhood of the Wolf”, although the palace conspiracies remained a central theme, as in the aforementioned Korean titles. 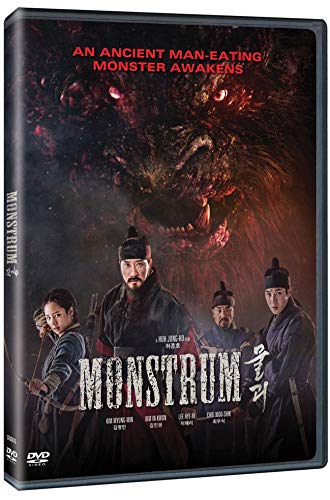 During the 22nd year of Jung Jong reign, the plague has spread to the whole kingdom and fear has taken over the people. When rumors about a monster killing and spreading the disease to its victims also starts spreading, fear turns into panic. As his political adversary, Sim Woon, seems to benefit from the turbulence, King Jung Jong is forced to bring his most trusted servant, general Youn Gyeom, back to the capital. The man retired to the country after a series of events many years ago, where he lives with his daughter, Myung, and his trusted associate, Sung-han. The three of them, along with king’s trusted official Hur, begin searching for the beast, without being certain if its existence is real or just a device of the king’s enemies. Although seemingly an ally, Jin-yong, the leader of a band of soldiers that are supposed to help in finding the monster, is quickly revealed to be the exact opposite, while a number of secrets and conspiracies come to the fore.

I will start with the negative. The movie is as predictable as one could possibly be. In theory, there is much mystery and many twists, but Heo Jong-ho “telegraphs” everything almost from the beginning. Furthermore, the story is filled with clichés of the genre (the ultimate fighter in exile, the comic character, the corrupt official and his henchman) while the elements of romance and melodrama are obviously here just to draw the crowds, without having any particular usefulness in the narrative.

These, however, are the only negative aspects, since the execution of the film is truly magnificent. The action scenes (both hand to hand and those against the monster) are impressive, with the combination of choreography, SFX, cinematography and sound resulting in an astonishing audiovisual experience. The fact that these scenes appear in abundance in the film is the greatest asset of the production, and in conjunction with the relatively small duration (105 minutes), retain the interest from beginning to end.

The second impressive factor is the acting, since the movies of the genre are not exactly famous for the performances featured. In this case, though, both casting and execution are of the highest degree. Kim Myung-min gives an unusually measured performance (again, for the genre), emitting dignity with every word and every move. Kim In-kwon as Sung-han is the main source of comedy and is also quite good while Hyeri as Myung is utterly functional, providing a necessary female “brush” in the narrative. The ones who steal the show, though, are Lee Kyoung-young as Sim Woon and Park Sung-woong as Jin-yong, who present the archetypical role of the “noble villain” in the most impressive fashion.

Add to the aforementioned some sociopolitical comments about corruption and the connection between authority and the public’s disinformation and you have the backbone of the movie.

“Monstrum” is a truly great mainstream film, which is bound to be enjoyed even from those who do not like action blockbusters.

Interview with Mohammad Reza Keivanfar: The basis of any kind of...