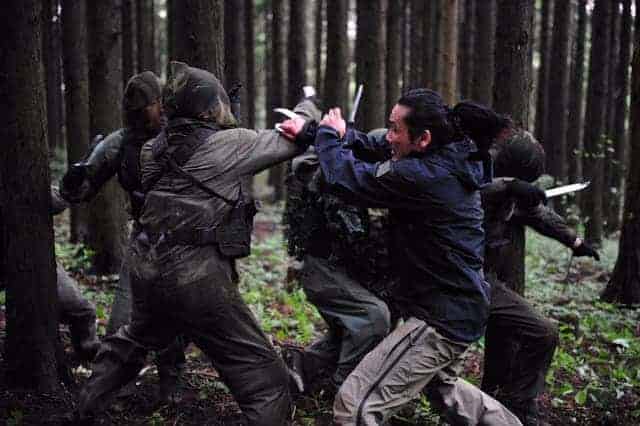 Yuji Shimomura has worked as a stunt co-ordinator on films such as “Shinobi: Heart under Blade” (2005) and “Flashpoint” (2007), as well as directing cinematics for the video game “Bayonetta” (2009). The influence of his earlier work in stunts is clear in this film, which features fast and frantic action sequences and is sure to appeal to fans of the martial-arts genre.

The film opens with a crack team of soldiers performing a military exercise in a large abandoned building. The group is tasked with taking down the “Ghost”, another soldier who is evading them. A problem soon becomes apparent when a third party appears in the building and begins brutally executing the soldiers one-by-one before disappearing into the shadows. We then meet a young girl, Sachi (Yura Kondo), living with her uncle Toshiro (Tak Sakaguchi), who manages a convenience store. It is clear that Toshiro has a dark and violent past. He explains to his psychologist he has several recurring dreams of killing people without compunction in the belief that he has some mission to accomplish. A short time later, we are introduced to a group of international super-soldiers, including the mysterious individual we saw in the first scene, each code-named and extremely dangerous, who are out to get Toshiro. This team of assassins are acting on the orders of their superior, a mysterious figure called Phantom (Akio Otsuka). It then becomes a deadly game of cat and mouse, as Toshiro tries to get to Phantom before they can harm him or Sachi.

There is some great world building here as we learn about this group of highly-skilled soldiers, and the few details that we are given about Toshiro’s history are all interesting. It is fair to say that the film relies most heavily on its action sequences, with the plot taking a back-seat at the half-way point in favour of extended exhibitions of martial-arts, gun play and knife fights. While earlier on in the film, through the character of Sachi, it seems as though there may be an attempt at delving a little deeper into the psychology of warfare, or the effect it has on men, this is quickly forgotten. However, I cannot mark the film down for this. It knows exactly what it wants to do and it goes for it full-throttle.

The choreography is really well done, showing the director’s vast experience in many types of stunt work and the fight scenes are clearly shot and easy to follow. Many of the fights are also kept small scale, which helps create a sense of tension and lets you enjoy the action without being overwhelmed by it. Kenji Kawai, best known for scoring “Ghost in the Shell” (1995), provides a great action soundtrack that also hits the emotional notes when required. Cinematographer Tetsuya Kudo does an admirable job of lighting and shooting in the several environments, from abandoned buildings to forests and cities. One especial scene that stands out is the scene shot in pitch darkness, with the action only illuminated by periodic flashes of light.

Your enjoyment of this film will probably come down to your tolerance for extended action sequences. The film could be criticized for leaving the story behind, especially in the second act, where we are treated to a lengthy, multi-part fight through a forest. While the film-makers do their best to keep it inventive, there are only so many ways you can see nameless soldiers being taken out before it starts to get tiresome. There is still a lot to enjoy, but the story seems to bookend the film rather than keeping you emotionally engaged throughout.

Tak Sakaguchi gives a physically intimidating performance as Toshiro, the former elite soldier who is attempting to leave his past behind. It is easy to accept that people would be afraid of him and he lives up to the legendary reputation the script gives him. Akio Otsuka is present only in a few scenes, but he exudes malice as the villain. Yura Kondo delivers a fantastically naturalistic performance as Sachi. There is a great supporting cast of characters too, including Mariko Shinoda, as an enjoyable femme-fatale.

Overall, I would recommend “Re:Born” to fans of the action genre. It may be short on story, but if you like martial-arts and well-choreographed fight sequences there is a lot to enjoy here. A solid thriller that puts some effort into creating an interesting world, characters that you care about, and some great set-pieces.