One of the most well-regarded choreographers of the day, Chia Tang has never caught on the way contemporaries Chang Cheh, Yuen Woo-ping or Liu Chia-liang have become luminaries in the style. Still, judging by this first directorial offering, he had enough to offer that should’ve kept his name in the genres’ upper echelon with this strong and highly enjoyable late-era Shaw Brothers effort. 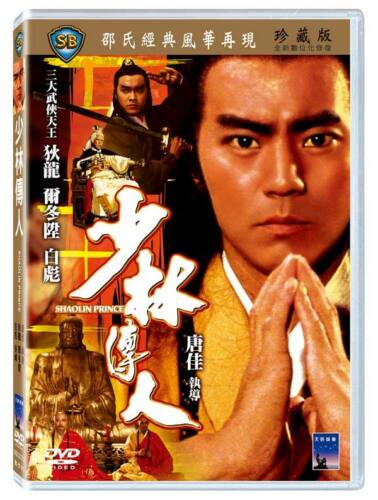 After being separated at birth, twin brothers Zi-tai (Derek Yee, from “Black Lizard”) and Dao Xing (Ti Lung, from “The Legend of the Drunken Master”) are forced to learn different forms of martial arts based on their disparate status in the world. With Zi-tai training with Emperor Gu (Fei Ai, from “Clans of Intrigue”) and Dao Xing living with the Buddhist monks Wu Ming (Hui Huang Lin, from “Bloody Parrot”) Wu Chu (Kwok Keun Chan, from “Duel of the Century”) and Wu Li (Tau Wan Yue) in the countryside, they are unaware of each others’ true identity as the evil 9th Lord (Jason Pai Paio, from “Butcher Wing”) seeks them out to kill the two in order to keep his secret rule intact. When they eventually reunite through happenstance and discover their rightful identities, they set out to take on the gang of criminals who murdered their parents so they can legally regain their status in the world.

Overall, ‘Shaolin Prince’ was a rousing and highly enjoyable effort. What makes this one of the better kung-fu entries out there is Tang’s intricate choreography, making the film based more on quality of fighting than anything else. The opening palace ambush and subsequent escape by the guards with the twins strapped to their bodies is a great start to this one, featuring the mini-battles and swordplay. As well, the sequence is even more fun with the desperation they show to get the kids to safety in the midst of so many opponents showing up to kill them. The series of battles and other training setpieces that Dao Xing goes through at the temple with the monks manages to offer up some lighthearted take on the usual routines that are traditionally featured for a fine counterbalance and the several big battles held at the temple are really dynamic. The impressive fighting styles against the guards that are able to form multi-member countermeasure forms during the battle is truly impressive due to Tang’s choreography style, while the interference with the monks hopping around on rudimentary pogo sticks offers up a fun interlude. Even the finale is impressive, banding their skills together against the vile prince and his steel-fingers for an athletic, engaging affair that shows off the skillset of the performers involved and making for a lot to like.

Also rather enjoyable is the political ramifications of the various storylines. Wong Jing’s screenplay offers up two different locations to play around with, bringing together the various styles and social systems rather nicely. Staying within the court system and the numerous attempts at political back-stabbing and maneuvering that takes place behind the throne offer some intriguing storylines here. As the evil general tries to underhandedly keep his power in the public eye while searching for the twins who are the rightful rulers, this is a cliched yet wholly serviceable method for keeping the film going due to the constant utterings of needing to discover their true identity. As this is taking place, the light-hearted meanderings at the temple with the bumbling monks makes for a comedic style series of training and combat scenes. Taking place within the temple grounds as they teach him lessons to use against the other students who are jealous of his techniques, the counterbalance between the serious-minded political backstabbing not only shows the twins’ differences but serves as a means of introducing the fabled book that serves as an integral part of the story. With the final half getting everything sorted out with the true traitor and his comeuppance as well as the discovery of the twins’ real identities, the film has a lot to like in this regard.

Moreover, ‘Shaolin Prince’ comes complete with more fun to keep this going. A slight diversion to a supposedly haunted house gives this the opportunity to bring in some horror elements through the battle with a possessed individual getting some great work there, involving the darker lighting and creepy tactics of the ghost. Showing it grow fingernails on the spot and disappear in mid-air is quite creepy, and the visual trick of the ghost appearing underneath a raising coffin is spectacular. Likewise, the opportunity to showcase the absolutely wonderful contraption in the finale with the traveling cart the evil emperor goes around in is absolutely crazy in the best manner. A box-loaded weapon filled with compartments to house hidden weapons, trap opponents within the arms of the device and being able to be manipulated while in combat against a foe, this device is especially impressive and carries on the rest of the fun with the martial arts skills demonstrated. The battles with the monks who form a massive singular figure out of the individuals manage to offer up the greatest showcase for Tang’s inventive choreography, and bringing in weaponry on fire into the battles is a nice touch as well. These all make for a great martial arts film.

Even with those positives, there’s still some work to be done on the other areas of the film. The biggest issue here is the disparate tones throughout the film, since the comedy is pretty lame and generally more cringe-inducing than gut-busting. The ironic part here is that this is more about execution than concept, since the idea behind what happens is usually pretty funny but it never comes off that way on film. Watching the monks’ pratfalls while attempting to teach Xao Ding the martial arts skills they possess should be funny, but instead their goofy faces, mugging for the camera and the exaggerated camera speeds photographing them bouncing off walls, flying through the air and acting with no semblance of rational human behavior is way too silly to be taken seriously. With the Emperor’s quest to kill them off taking place for the vast majority of the film, this seems way too light and becomes at odds with that material. The other minor issue is Jing’s convoluted storyline at work here as it needs a little more streamlining. The film tends to go all over the place in terms of plot and characters since there are so many different people at play within the story. Focusing on so many individuals within the traitor’s court, the Imperial court and the various monks at the temple that come into the brothers’ lives makes for a somewhat confusing entry trying to keep track of who’s really on who’s side. However, it’s a rather nice and enjoyable effort if you’re into the choreography.

Filled with impressive martial arts scenes, a convoluted if still intriguing storyline and some lighthearted moments alongside the darker elements, ‘Shaolin Prince’ has quite a lot to like for fans of old-school kung-fu films. Give this one a chance if you’re a hardcore Shaw Brothers fan or looking for more of their work beyond the 70s classics, while those looking for a generally more simplistic approach should heed caution.