During the late Ming Dynasty in China, a minor coastal village is besieged by Japanese pirates. Hsiao Feng, a wondering swordsman is caught in the ordeal; he kills a few pirates and decides to stay and help those defenceless villagers. This is the basic setup for “Beach of the War Gods”, an anti-Japanese, patriotic movie written and directed by Jimmy Wang Yu for Golden Harvest studios. 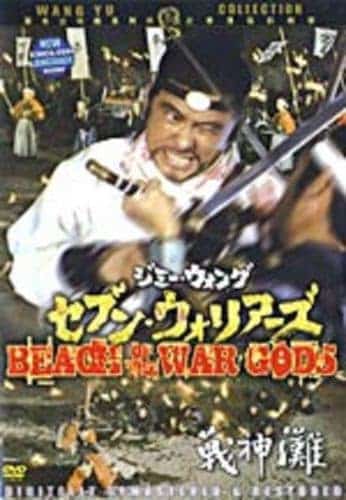 However, before Hsiao Feng can face the Japanese, he sets out to recruit some fighters, all with different skills none the less. One recruit is a good knife thrower; one has a pair of iron shields as weapons and another uses twin spear. Altogether, they start preparing the villages for a heroic bloodshed showdown which eventually takes place on a beach. This plotline does recall the one from Kurosawa’s “Seven Samurai”, but now we have the Ming Dynasty version, it’s Chinese against the Japanese. However, there are only four recruits this time around.

Hsiao Feng, the patriotic hero, played here by Jimmy Wang Yu, is a highly skilled swordsman. Therefore, we get to see plenty of sword fighting action and hardly any hand to hand martial arts combats. Of course Jimmy is right at home here, slicing his way till the final frame and he carries the movie with great authority.

As a director, Jimmy is adequately impressive; the movie looks great, there are plenty of wide compositions of windswept shores, epic battles and the costume design is equally well thought of, throughout. The overall look is particularly close to those Japanese samurai movies. On the other hand, even with the cast of thousands, there is hardly any female role in this highly male oriented movie. In fact, it is advertised that way in the trailer.

However, even with a simple plot, director Jimmy is able to build up the suspense with his well-staged action. The last half is just a long all-out battle, in which booby traps, acrobatic action, slow-motion are all used to create mood and atmosphere.

Interestingly, the Japanese pirate chief, Shinobu Hashimoto, shares the same name as the screenwriter of Kurosawa’s Seven Samurai. It looks like Jimmy Wang Yu has a good sense of humor. Anyway, he’s played by Fei Lung with adequate meanness; furthermore, he proves to be a good match for our hero.

“Beach of the War Gods” is foremost an action movie, not a lot is concentrated on building the characters. This is rather a letdown since we could have learned more about the four fighters Hsiao Feng recruited. However, the movie looks epic, and if you’re interested in sword action instead of hand to hand combat, this is the movie for you.