One of the most venerated titles in their filmography, the Shaw Brothers studios hit a pop-culture high with this engaging kung-fu masterpiece. Featuring director Chang Cheh at the top of his game and introducing several soon-to-be stars from their lauded cache of talent, ‘Five Deadly Venoms’ emerged as one of the most important works in the genre even though it’s a case of the later impact superseding the final product. 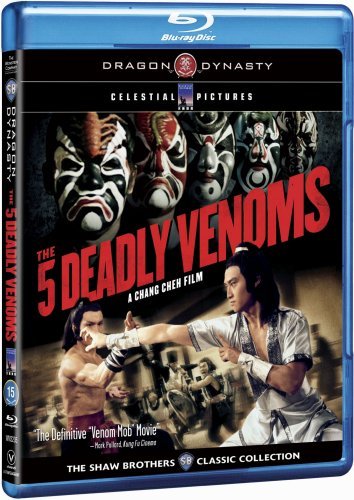 About to finally die, the master (Dick Wei, from “Yes, Madam”) instructs his final student Yang Tieh (Chiang Shen, from “The Flag of Iron”) to check on the activities of his former pupils, each of whom knows a unique and specific style of kung-fu. Finding each student, the Scorpion-style master Kao Chin (Sun Chien, from “The Kid with the Golden Arm”), Lizard-style master Meng Tien-hsia (Phillip Kwok, from “House of Traps”), Toad-style master Liang Shen (Lo Meng, from “Human Lanterns”), the Snake-style master Chi Tung (Pai Wei, from “The Prodigal Son”) and the Centipede-style master Chang Hsiao-tien (Lu Feng, from “Invincible Shaolin”) each living in complete isolation from everyone else, he goes about trying to follow his mission when he gets wind that perhaps one of the students is about to be involved in a deadly gold heist. Realizing what’s about to happen, he must team up with the remaining students to stop the evil students from carrying out their malicious intentions.

Unlike what its reputation suggests, ‘Five Deadly Venoms’ isn’t one of the finer Shaw Brothers efforts. What works fine is the usual format at play with a storyline that allows for a near-endless stream of fighting, and the performers are granted numerous opportunities to shine. There’s a lot to like here with the shots of each fighter in the training sessions, that showcase their frantic movements that allow for the visible differences between each of their styles to come forward, from hard-hitting blows to lightning-fast strikes and even the ability to scale walls. That turns the later confrontations into rather enjoyable martial arts affairs. There’s the street fight that brings the first killer to justice or the few demonstrations against the guards that are brief, quick affairs that generate the needed action to hold it up until the finale. That’s where the film really hits its mark, allowing five of the studios’ greatest to go at it in a spectacular, extended battle that works in some stellar wire-work stunts alongside the acrobatic flipping and hard-hitting hand-to-hand battling within the environment. It’s the unquestioned highlight and really helps ‘Venoms’ considerably.

Still, the main problem to be had with this one is the rather sedate and bland pacing. Chang Cheh and Ni Kuang’s script opts for a far more investigative angle having Tieh find out the true identities of the different pupils of the teacher, meaning there’s not much in the way of fighting that comes into play. Instead, there’s too much emphasis on figuring out the truth of the fighters’ identities and then turning into the plot about the money heist they’re undertaking. By placing more of an importance on the beggar’s confession about the opening murder, these scenes in the jail beating him up and trying to get a confession into him hold up the majority of the film’s running time. In the end, this tactic ends up forgoing a lot more of the usual confrontations. Even some of the usual manner of dealing with people in other movies of being thrown into an endless round of kung-fu fights as instead they are manually killed with various knives and pointed weaponry.

This decided lack of action is only confounded by the intrigue-laden plot. This trades more on each of the students not knowing the other and really doesn’t go anywhere. Filled with the backhanded dealings and the various clandestine meetings that take place, a facet that’s completely unnecessary for such a simple plotline, the end result is a film without much in the way of hard-hitting action for much of its running time. While this isn’t in the slightest boring, the plotline that could’ve provided full-on balls-to-the-wall action doesn’t get there. It all ends up confounded by the inability to really engage its side plots coherently. The charge for the hidden gold that emerges as the main plot point in the final half feels incomplete with no real point for any of the characters to go after it. We are told that those who are chasing after the money are already rich, making why they would need it in the first place rather confusing. There really should’ve been more info here for each of the participants to explain this part of the story.

As there are a few big flaws to be had about the film that does emerge as a result of a haphazard story and a less-than-ideal tempo, ‘Five Deadly Venoms’ has its moments but ends up falling short in the long run. Give this a chance if you’re a hardcore kung-fu/martial arts film fan or a devout Shaw Brothers effort, while those that require more from their films than this should look for other classics in their catalog.