Korean actor Ryu Jun-yeol and Japanese actress Nana Komatsu will both be awarded the Rising Star Asia Award at this year’s New York Asian Film Festival, which will run from June 28th to July 14th, 2019.

Ryu, who got his break in the Korean Academy of Film Arts feature graduation project “Socialphobia”, exploded as a film star in 2017, with star-making turns in “The King”, “Heart Blackened” and the year’s biggest hit “A Taxi Driver“. He followed it up in 2018 with equally impressive roles in “Little Forest” and “Believer” and has already featured in “Hit-and-Run Squad” and the financial drama “Money” already this year. 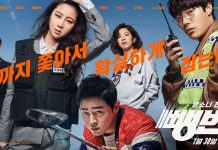