The reputation of an auteur precedes the work of art. And it does not get much bigger than Abbas Kairastomi. There are articles written on the order in which one needs to watch his movies, phases in one’s life when a movie makes more sense than others etc. And here I was about to watch the 1997 Palme d’Or winner. Normally I get carried away by such rhetoric. But I decided to watch this movie for what it is and with my experience of having seen two other Kiarastami movies, pen down my thoughts. 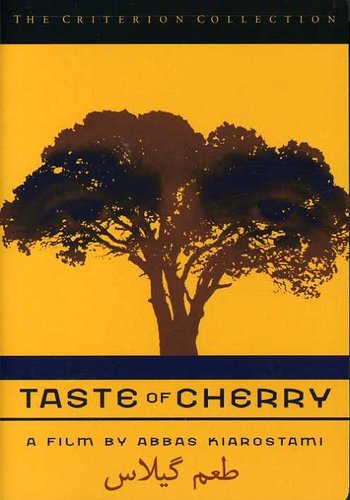 The protagonist is in search for someone to perform a task for him which comes with a generous pay. He drives around wastelands and construction sites in an Iranian city suburb, listening to conversations so as to find someone genuinely in need of money. Such a man would be sincere enough to perform the duty assigned to him. Though in the beginning there is an intrigue as to what the task might be, to the extent of it even being a homosexual request, we find that the lead Mr Badii wants to commit suicide and needs someone to cover the grave with dirt once he kills himself.

A young soldier, a seminarist and a taxidermist are invited into the Range Rover one after the other. The professions naturally share the economic and political situation in the country. But the same request to perform the rites to three different people is repeated and instead of the boredom in monotony, the conversations brings one closer to the man, his community, and the value of life. Most scenes show only one person talking and one gets the feeling that the maker is directly speaking to the audience. Homayoun Ershadi as Mr Badii portrays with ease the confused determination of a man ready to end his life.

Kiarostami implements a simple, straight forward story telling, but the simple imagery and dialogues stay on for quite some time and makes you wonder. Is that what you saw or was there something more? And like fine wine, the memory of the movie is endearing. Movie as an art form has such unique compulsions it can generate by the way it has touched more than one sense.

Kiarostami’s love for the long winding roads by the hills is almost meditative. Movie is a medium where sound may still be able to do the job without much support from the image. This is one of Kiarostami ’s signatures. He shows the face of a character only when it is absolutely necessary. And that lets the viewer create his own image of a face, almost like how one imagines places and people when reading a book.

The climax for me leaves the question of what happened to Mr Badii unanswered. But the director’s cameo and the sudden greenery is leaning towards an autobiographical reference. Something so beautiful did come out of a similar experience in personal life and he could not have explained it any way other than by portraying a camera and crew in the green hillocks of his country.