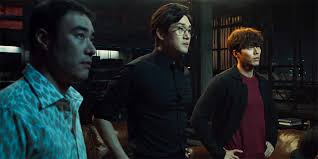 From the “Oceans’ Eleven” series and it’s many spinoffs over the years, it’s obvious how the multi-star driven heist caper film has become a big aspect of big-budget Hollywood. Traveling to South Korea for their own spin on the formula, this energetic offering from director Jang Chang-won comes July 30th on digital and Blu-Ray from WellGo USA.

After being one of many victims in a legendary con, scam artist Hwang Ji-sung (Hyung Bin, from “The Fatal Encounter”) finds that the man responsible for pulling off the caper, Jang Doo-chil (Heo Sung-tae, from “The Age of Shadows”) didn’t commit suicide as was reported but is still very much alive. Learning that the political ramifications of the event won’t bring Doo-chil to justice, he decides to come together with police officer Park Hee-su (Yu Ji-tae, from “Oldboy”) and his off-the-books team Kwak Seung-geon (Park Sung-woong, from “Monstrum”) Ko Suk-dong, (Bae Seong-woo, from “The Phone”) and Choon-ja (Nana) in order to finally bring the man to justice. Moving to various other members of Do-chil’s criminal empire, Ji-sung and Hee-su learn the value of teamwork as the scheme to get everyone what they want eventually starts to go sour for everyone involved.

There were a few aspects to like with “The Swindlers.” The multilayered storyline from director Chang-won is incredibly fine, bringing together the stakes of the con and what’s the plan for revenge in fine order. Knowing the ruse from the start and why they’re coming together, the various stages of the con and the target behind it all, manages to bring the film together for a fast start to hit the ground running. With the first examples of the con managing to bring Hee-su and his team together with Ji-sung being more of an action-film styled con taking on fake identities, plenty of high-tech occurrences and some stylish camera-work from Lee Tae-yoon, this early setup is gripping and features the type of enjoyable work that’s to be expected throughout here. When it gets deeper into their plan and the various points that the team is trying to accomplish, the convoluted method of their scheme has quite a twisted workout that continually delivers tons of twists and turns.

However, that is really all that “Swindlers” has going for it. The biggest issue here is that Chang-won’s convoluted script that manages to evoke a truly effective caper, simply comes off too complex for its own good. Based on everyone trying to backstab each other and not making everything so crystal clear as for who’s on what side, the story for “Swindlers” tends to become far more complex and twisty for its own good. The idea of a group of swindlers coming together after finding themselves the victim of a con and taking revenge on the mastermind behind it would’ve been far simpler to have as a storyline that accomplishes the same thing. However, since the film follows so many stereotypical elements of crime-caper films, like the borderline ethical police officer, the thug with the heart of gold doing it for honorable reasons, the ditzy femme fatale who’s only there for her looks and the geeky computer expert which is nothing new and handled by underwhelming performances across the board, that factor lowers the film somewhat.

While there are a few decent and enjoyable aspects, “The Swindlers” is simply undone by it’s convoluted, twisting storyline full of cliches that are brought to life by underwhelming characters. Really only give this one a look if you’re a fan of these slick crime capers or curious about a Korean style attempt on the style, while those that don’t find the genre all that enjoyable should heed caution.

Trailer for Upcoming Korean Film “The Negotiation” by Lee Jong-suk