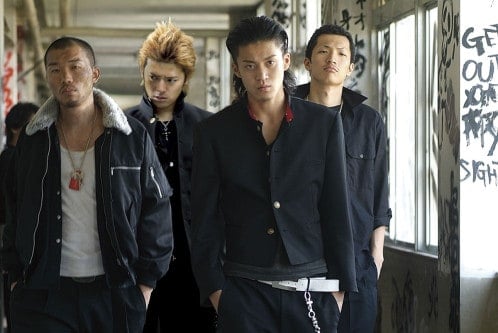 “Crows Zero” was one of Takashi Miike’s 2007 creations. With this movie, the very prolific filmmaker develops a prequel to Hiroshi Takahashi’s mangas “Crows” and “Worst”. 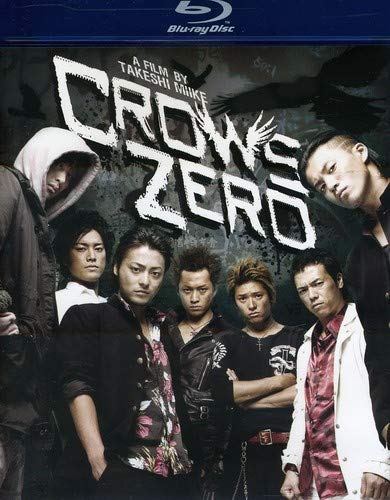 The film follows the story of Genji Takiya. He is clearly a rebel, because he has a funky haircut, smokes, and has chains to his jeans (not practical to fight, but fashionable). He happens to be the son of a yakuza. He also happens to start at a new school, Suzuran All-Boys High School. If he can take over the worse school in Japan, he could take over his father’s crime organization. That is not an easy task, considering the many funky-hair-and-chains-to-the-jeans teenagers in the high school.

The feature includes what usually makes a good yakuza movie: alliances & loyalty, fight scenes & intense looks, humour; the influence from manga is also clear, with very graphic and sometimes over-the-top scenes. Besides the theme and action, Takashi Miike’s print is also there with a lot of bleeding people.

But then, will you ask, what is the deal? Action, blood, humour and yakuza are the perfect recipe. A bonus point could also be added for fight scenes in the rain, which, let’s be honest on a guilty pleasure here, makes the scenes more fun. All of the above make the movie somehow enjoyable. But (because there is always a but), the humour is not strong enough, there are too many characters and it takes a while to understand who is connected to who, who is loyal to who, and what the stakes really are. The fight scenes are also a bit too long. Finally, there are almost zero female characters; and the very few ones who are seen on screen are the love interest/damsel in distress. Even then, the love story could have given a bit of depth to the teenage girls. Unfortunately, it doesn’t.

Acting-wise, the actors are in line with the genre, and the fact that it is a manga adaptation. It is also nice to see Shun Oguri in a role far from romantic Rui in “Hana Yori Dango”.

Image-wise, there might not be any revolutionary shots, but the visuals are nice and clean and do what is expected from them. That is already a pretty difficult task.

In conclusion, “Crows Zero”, although a bit uneven and long, is a quite entertaining and watchable movie.