“Godspeed” is director Mong-Hong Chung’s fifth narrative feature film. Chung was born in Southern Taiwan. Originally, he studied computer engineering in college, however his love for cinema, especially for films by Oshima and the New Taiwanese Cinema, led him to pursue filmmaking. After he finished his study at the School of the Art Institute of Chicago, he started his career directing commercials and music videos. His first feature film was a documentary, Doctor (2006), which won him a best documentary award at the Taipei Film Festival and established his name on the Taiwanese film landscape.

the golden age of the Taiwanese New Cinema, it often feels like Taiwanese directors are in a limbo. Should they follow the steps of the masters and make films that could play well in the international film festival circuits; or should they embrace commercial or genre filmmaking? Making art or making money that’s the key question for most of the Taiwanese filmmakers. Chung is a weird hybrid of these two impulses. On the one hand, his films often have generic elements. “Parking” (2008) has thriller element. “Soul” (2013) is a horror film. The newest one in his oeuvre “Godspeed” is a hybrid of gangster and road movie. On the other hand, there are few Taiwanese directors who retain the control of their films like Chung does. Chung writes, shoots (under the name Nagano Nakashima), and directs all his works. Unlike previous Taiwanese masters who create their own film styles to express their personal visions, Chung channels his way of seeing the world though movie conventions. 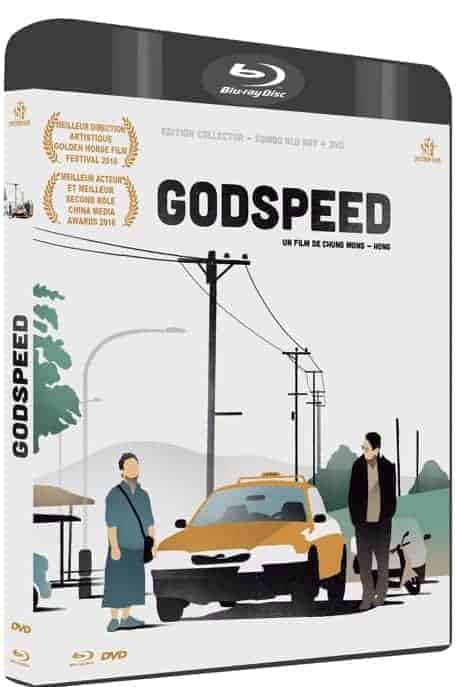 “Godspeed” tells a story about a low-level criminal, Na Dow (played by Yu-Zhi Lin whose stage name is also Na Dow, which is the Mandarin translation of the Japanese food natto) whose job is to move drugs and money for a mafia boss, Da Bao (played by Leon Dai, one of the most successful actors in Taiwanese Cinema). In one trip, Na Dow hires a Hong Kong expat taxi driver, Old Xu (played by Michael Hui, a prominent Hong Kong actor and comedian) to drive him from Taipei to Southern Taiwan to deliver the drug. However, the job goes horribly wrong and they have to figure out a way to survive in this mess.

Who are these Taiwanese gangsters? What can they teach us about the place they are from? What can they teach us about ourselves? As Robert Warshow wrote in his classic “The Gangster as Tragic Hero,” American gangsters embody an “intolerable dilemma” that is inherent in the American dream: one is expected to be successful, yet when one achieves the goal, it also means that one is separated from others. One becomes a true individual which will then lead to the demise of the hero. Another feature of the American gangsters is that they can only exist in the city. Their knowledge and skills can only be useful in a modern space.

In many ways, Chung’s Taiwanese gangsters are direct opposites to their American counterparts. They roam around the margin of the city or the countryside. It seems like they don’t live in the city. Even if they do, they definitely don’t enjoy the city life too much. Contrast to the claustrophobic framing of the gangster films from the Classical Hollywood era, for instance, at the end of “White Heat”, where Cagney is blocked by the complex industrial architecture, Chung constantly reminds the audience of the expansiveness of the Taiwanese landscape. He constantly uses aerial and wide angle shot to capture the landscape in full. Instead of being portrayed as larger-than-life characters, the main characters are often tiny spots in the frame.

If the American gangsters are always looking for ways to climb up the social ladder and trying to take over other mafia bosses’ businesses, the gangsters in “Godspeed” don’t have any plan to take over other gangs’ territories. Instead, they spend most of theιr time talking. However, unlike the pop-culture savvy characters in Quentin Tarantino’s films, people in “Godspeed” talk about all the strange things they encountered. Da Bao talks about his adventure in Thailand. Old Xu talks about his miserable birthday experience. Na Dow talks about (or makes up) his childhood experience. Another mafia boss, Brother Tou talks about his strange encounter with a Chinese family. They use these stories to make connections, convey something that cannot be expressed in plain language, or impart moral lessons. The director mentions in one interview that the he wants this film to be about how different people connect with one another. It is through story-telling that these connections can happen.

There are different ways to tell a story. You can tell a story from either an external, or an internal point of view. Da Bao and Old Xu represent the two types. The mafia boss Da Bao is always imposing his narratives onto others. Early on in the film we hear him ordering what Na Dow should do and where he should go. He acts likes like a director directing the action of Na Dow. Old Xu is different. He often participates in the narrative that he creates, and he can draw others into his imaginary world. In one scene, he and Na Dow stop at a house where a family is having a funeral. Old Xu thinks that he might be able to get something to eat at the funeral, so he pretends that he is an old friend of the deceased. This scheme backfires horribly for both of them (they have to pay a fortune to the family to get out of there. The son of the deceased acts more like a gangster than our two heroes). While this scene doesn’t contribute much to the plot, it shows us that Old Xu is the one who can improvise, invent stories on the spot, and let others to play a part in them. Close to the end of the film, Old Xu shares a sad story to Na Dow, in which Xu’s family neglects him on his birthday. At the last scene of the film, Na Dow helps Old Xu to fulfill his birthday wish- to have soup dumplings on his birthday. At the end of their journey, what they really get from all the hassles is a deeper understanding of each other. And this understanding can only be achieved through sharing stories and drawing other into your imaginary worlds.

Unlike Robert Warshow’s American Gangsters, the Taiwanese gangsters travel at the margins of the cities and dwell in the rural area. Instead of money and power, what they gain at the end of their journeys is a sense of mutual understanding and respect.