Takashi Miike has made a career out of being a director for hire, and this capacity of his found one of its apogees in “Kumamoto Monogatari” an omnibus consisting of three films that the government of the Kumamoto prefecture on the island of Kyushu ordered, with the intent of educating children about the history and folklore of the island. The project actually begun in 1996, when producer Kaoru Hanaki invited the then unknown Miike to direct the three films ordered (“Zuiketsu gensô – Tonkararin yume densetsu”, “Kikuchi-jô monogatari – sakimori-tachi no uta”, “Onna Kunishuu Ikki”) which were completed in 1998, 2000 and 2002 respectively and were screened exclusively at the Kumamoto museum of history. The movies never received a theatrical release but PIA film festival introduced them in 2002 as a single omnibus film titled “Kumamoto Monogatari”. (Source: “Agitator” by Tom Mes). 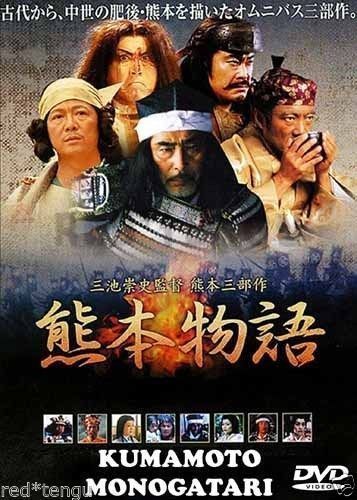 The first part begins with the imperial army slaughtering an entire village in search of a girl, who barely manages to escape into the Tonkararin tunnel due to her parent’s sacrifice and a supernatural power that was emitted from the cave. 20 years later and the girl has become a priestess for the people in the area, but the same danger appears again and the girl has to sacrifice herself in order to save her people.

The segment focuses on the concept of self-sacrifice for the good of the nation, and adds another layer in the concept by having a woman sacrificing herself for the good of her male-dominated country, thus achieving the status of hero, in a kind of misguided, misrepresented chauvinistic message.

This segment is the most artistic one of the three, with Miike adopting a rather ritualistic approach to the story, as dictated by the lengthy traditional singing and dancing scenes, while the theatricality of the acting also moves towards this direction. The late Mikijiro Hara, in one the protagonist roles, gives a great performance in the exaggerated style of Japanese theatre.

The second one, and the most unremarkable of the three, tells the story of the sakimori, a garrison stationed in the coastline of Kyushu which was comprised by men from the North, who were drafted in the 7th century AD to serve for three years, in order to guard the area from a Korean invasion. The invasion does not happen during the film and a number of the soldiers are left in the area, since they could not afford to return and the government did not help in that regard.

The pointlessness of the system is highlighted quite thoroughly but at the same time, the value of fulfilling your duty despite the reasons is also heralded, with the story focusing on self-sacrifice as one of the main tools that made Japan what it is now, in a rather jingoistic message.

Miike tried to do a lot more than he could afford in this one, even including 3D sequences and a plethora of bad SFX, starting from the beginning and the presentation of the sea. The sole two elements that stand out and actually remind that this is a Miike movie is a small scene that breaks the 4th Wall when a man addresses the audience to ask them to put on their 3D glasses, and the cast, which includes Miike regulars like Renji Ishibashi and Ren Osugi along with veterans like Akira Emoto.

The third segment is the lengthiest and the most impressive, as it takes place in the samurai era, and particularly the Toyotomi rule. The story focuses on an insurgence in the area of Kumamoto after a rather unfair government decree that, in essence, reduced the local landowners to servants.

Miike here focuses again on the concept of heroism, which in this case, includes children and women. The segment takes a rather melodramatic turn after a fashion, but the various battles are quite impressive considering the scale of the production, while a few scenes that border on exploitation (the one with the little girl stabbing the samurai, for example) make this part the most entertaining, and in essence, the most accessible. Kazuki Kitamura (mostly), Kenichi Endo and Yoshio Harada are the ones that steal the show, and cement the great cast of the whole omnibus.

The triptych is of some value, with a number of interesting elements here and there, but in essence, this is a film mostly addressed to children of the area (it actually fulfills its initial purpose to the fullest) and hardcore fans of Miike, like us, here in Asian Movie Pulse.