Hong Kong has a rich and renowned cinematic history. From time to time, filmmakers pick up the precarious political relationship to mainland China. 1997, only a few months after the city returned to Chinese rule, Fruit Chan released “Made in Hong Kong”. The pessimistic indie flick marks the beginning of Fruit’s unofficial trilogy about Hong Kong in the late 90s, entering a new era. “The Longest Summer” (1998) is seen as the second contribution to the series and finally, in 2001, “Little Cheung” concludes the trilogy. 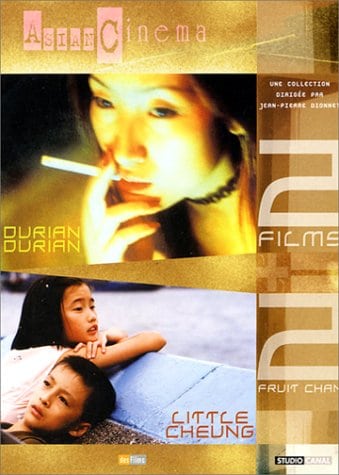 “Little Cheung” looks back at the time shortly before the reunification with China. A nine-year-old boy lives in a poor neighboorhood of Hong Kong and delivers food of his father’s restaurant to an often shady triad clientele. He encounters a little immigrant girl named Fan and they start spending time together and begin a quest for Little Cheung’s lost brother.

The cast consists of mostly amateur actors with Yiu Yuet-Ming as Little Cheung and Wai-Fan Mak as the female counterpart. She also appeared in Chan’s “Durian Durian” one year before. Big names like Sam Lee (“The Monkey King” 2002), who was first spotted by Fruit Chan for “Made in Hong Kong”, and Tony Ho (“Infernal Affairs” 2002) only find recognition in smaller roles.

The movie leaves space to the characters, giving them an opportunity to breathe and introducing the scenes often with a prelude. This helps the viewer to dive into the atmosphere of the sequence before the plot actually kicks in. There is time to look at the environment, the setting and the way people interact on a daily basis. As a result, “Little Cheung” seems authentic and natural.

Cinematographer Lam Wah Cheun and Fruit Chan collaborated on many films before and after (“Made in Hong Kong” 1997, “The Longest Summer” 1998, “The Midnight After” 2014). The camera angles mostly reside in further distance and gives us the feeling of a secret observer. But sometimes it leaves behind its safe space and hops real close into the action.

The camera lenses capture a harsh world, in which money means everything. Everybody fights for survival. Fruit Chan shows a social realism drama through the innocent eyes of a little boy. The charismatic lead must learn the hard way what it is like to grow up in Hong Kong during that period of time. In one of my favorites scenes, his father forces him to stand still outside for many hours as punishment. As he endures the rain and the shame, Little Cheung starts singing. In another emotional breaking point, the passing of Cheung’s grandma is visualized via a touching use of editing. A sad and melancholic moment, that can hold up with the iconic “remembering father”-sequence of Wong Kar Wai’s “Fallen Angels”.

Not many movies have taken the responsibility to tangle the political relationship between China and Hong Kong. “Little Cheung” deals with the looming overtake from China in a subtly way. The social dichotomies, the topic of immigration, and the pure capitalism that spreads across the city are ultimately tied to political aspects. Fruit Chan enters a touchy territory and risks a ban in Mainland China, which is still one of the biggest audiences for Hong Kong Cinema. In the early and late 90s, the Hong Kong cinema seemed to be more independent than nowadays. Films like “From Beijing with Love” (1994) or the more recent “Election” (2005) are two of the rare examples who question the autocracy of China. Fruit Chan’s trilogy is, therefore, a full-on tackle. But instead of hitting hard, the story remains filled with sensibility due to its innocent lead roles.