As the boom of J-horror was slowly declining, the movement, which became popular for its blend of contemporary themes and Asian folklore, was looking at new shores that would provide new ideas. While directors such as Hideo Nakata were busy applying their stories within a western framework, sometimes with them helming the American remakes of their own films even, others, like Kiyoshi Kurosawa attempted to expand the borders of J-horror expressing concerns and fear about at that time upcoming technologies like the internet. Being one of the most popular names associated with J-horror after his film “Ju-on: The Grudge” (2002) as well as its sequel, Takashi Shimizu would release “Marebito” the same year as the American remake of the film which had put his name on the map of international audiences. 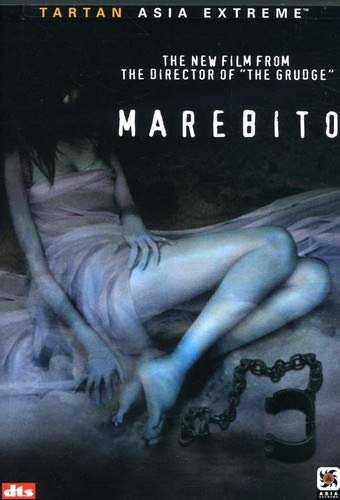 Masuoka (Shinya Tsukamoto) lives a reclusive life in his apartment watching the recorded footage from his camera which he carries with him everywhere he goes. In his various descends into the streets of the Japanese capital, he searches for the experience of real terror that he attempts to capture on film and hopefully will be able to understand and analyze further. On one of these walks through the city, he records a man surrounded by policemen who eventually commits suicide. The final expression of the man confirms his beliefs about the experience of real fear at a person’s final moments.

In order to advance in his research, Masuoka ventures into the old sewer and underground tunnels beneath the city’s surface, a maze-like structure in which he loses his sense of orientation, time and place. When he comes across a naked girl (Tomomi Miyashita), he takes her home with him trying to take care of her and help her find whoever she belongs to. However, his actions have provoked entities living underground and before long he is warned about the danger he is in and the potential threat the seemingly harmless girl poses.

At first, any viewer will notice the significant visual deviation from the other works of the director. Shot in only eight days, “Marebito” makes extensive use of the grainy DTV footage recorded by Shinya Tsukamoto’s character, adding to the overall sense of dread and the general theme of voyeurism at the heart of the film’s narrative. Glued to the camera as he walks through the streets, Masuoka seems to have lost an important connection with his surroundings, which is especially evident in the way he neutrally watches the footage of disturbing events from suicide to self-harm. In a very short time it becomes obvious how his original plan to record what he perceives as authentic fear has turned into a disturbing obsession. Masuoka is in many ways a character similar to Carl Boehm’s role in Mike Powell’s “Peeping Tom” or the obsessive photographer in Michelangelo Antonioni’s “Blow-Up”. Even Tsukamoto’s own works come to mind, especially if you compare this film’s protagonist to the director’s role in, for example, “Bullet Ballet”.

However, Shimizu and Chiaki Konaka, who co-wrote the script with the director, seem to be after something other than the kind of scares an audience would expect within J-horror. The world surrounding the main character is one of filth, loneliness and poverty, an unwelcoming and hostile place which he has decided to view almost exclusively through the filter of technology. As soon as he encounters the helpless girl, who he creatively names “F” after a while, Masuoka is forced into some kind of action, to give up the kind of numbness which had become his usual mode of operation. At the same time, this obsession with the camera runs so deep, he is unable to give it up completely, eventually leading to acts proving his emotional instability and antisocial tendencies.

In the end, “Marebito” is a film which, especially in the second half, has its flaws, perhaps unavoidable given its speedy production. However, its portrayal of the urban sphere supported by Tsukasa Tanabe’s cinematography, the relationship of man and technology and the world hidden underneath our perception make “Marebito” a work worthy of re-evaluation and re-discovery for moviegoers.