The fact that Miike made this film the same year as “Ley Lines“, “Audition” and “Dead or Alive” may come as a complete surprise initially, but once one looks at the credits, the reason will come out: Hisao Maki, the “nemesis” of Miike’s quality is once more in charge of the script, and as usual, the result is quite bad. 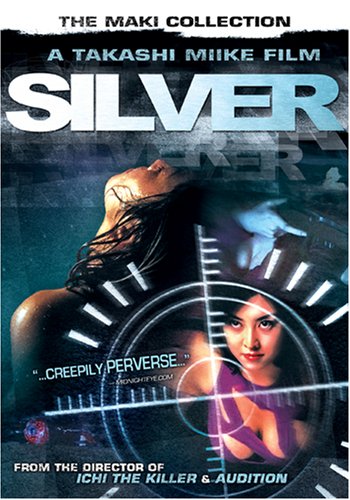 The paper thin story revolves around Jun Shirogane, an ample-bosomed wrestler and champion of karate who is recruited by Minamida, a secret agent who happens to be an ex-lover, in order to fight criminals outside the law. In order to so while undercover, she joins a female wrestlers troupe (where she takes the name Silver), who eventually travel to the area her first target is located: Nancy Otori, a dominatrix who has enslaver men in power with her S&M tricks. The clash between the two women is inevitable, but Jun becomes a slave before she manages to retaliate with the help of a professional assassin from another secret organization named Viper’s Hole or sth.

I can understand that Miike’s style frequently looks like a collage of different elements, but the script Maki provides cannot even be described as that, since the various aspects of the movie seem to have no connection with each other, whatsoever. In that fashion, the martial arts (and wrestling), the perverse sexuality (including S&M elements and some rather intense scenes as the one where a “victim” is drinking Nancy’s piss), the (utterly failed) Seijun Suzuki yakuza parodying elements, and a number of other “tricks” all seem to appear here just for their own sake, without any connection the main story (what main story?) for that matter. Through this tactic, fans of exploitation will definitely find scenes to enjoy, but more like as if they were watching different clips on the internet, rather than a single, compact movie.

With an extremely low-budget, V-cinema production, one could not expect too much from the cinematography or the special effects (the latter are pretty awful), although Yasuhiko Mitsui does his best to portray the many different settings with a trashy sleaziness that fits the general aesthetics of the movie.

In this setting, the acting could not be decent either, although Japanese gravure idol Atsuko Sakuraba manages to mess up even this role. She does looks sexy though, and also fits the general exploitation premises of the film. Probably the sole decent acting comes from Keiji Matsuda as Nancy, who is actually convincing as the perverse dominatrix. Not much more to say here, the films seems to be addressed to fans of low budget films that combine S&M with martial arts, but even they will probably be dissatisfied, at least regarding “Silver” as a whole. And as Tom Mes mentions in his review of the film, you cannot blame it all to Hisao Maki