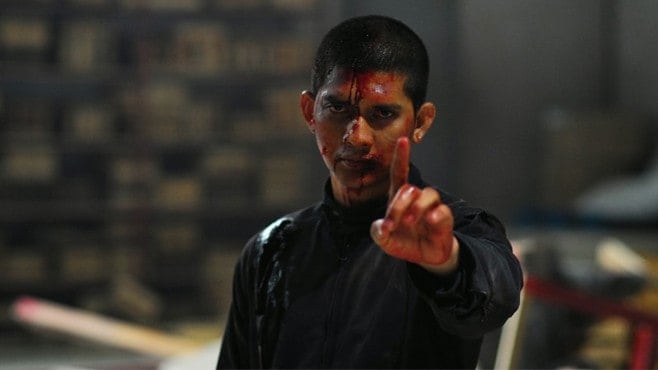 The 2011 film was a clear example that there is nothing wrong with simplicity if it’s executed correctly. Then it went and became one of the best action films of the last decades, and ended becoming a little cult film for action aficionados. This sequel spreads much more the universe created in the first film, with a larger budget.

The plot is simple: we have our main guy Rama (Iko Uwais) from the previous movie, who has to infiltrate this powerful gang in Jakarta in order to catch all the corrupt police officers and police bosses, especially Reza, who is the main goal. To do this, he must enter in prison to gain the friendship of Uco (Aricin Putra), the son of powerful gang boss Bangun (Tio Pakusadewo), in order to enter the gang as a new member.

Aricin Putra does an incredible job playing this ambitious kid, who feels that his father does not give him enough recognition inside the gang organization. Iko Uwais also gives one hell of a performance, not only in the fighting skills, but also as a dramatic actor. You can see he has evolved as an actor since the first “Raid” film. Yayan Ruhian returns after playing Mad Dog in the first film, but here he plays a different character, for obvious reasons. You might get a little confused, in spite of playing a different character and having a different look, you can clearly see that he is the same actor. His fighting skills are really breathtaking, as he is also the action choreographer. There is also a nerdy/comic book feel in the film, with some of the characters such as the baseball bat guy (Very Tri Yulisman ) and the hammer girl (Julie Estelle)

Furthermore, we have more characters, more locations, more diverse action and an improved direction by Gareth Evans. The way he films the action is truly outstanding, using a handheld camera in a way it feels as if we are watching the action in brief long takes. We, as the audience, don’t miss anything, and that is saying much nowadays in action cinema. The pacing is also remarkable, taking into account the long duration of the film (2 hours and 30 minutes). The director looks for more detail when framing his shots, creating a gorgeous cinematography with his main DP Matt Flanery, frequently looking for some symmetrical shots and some contrast with the scenery: The red blood mixed with the white snow or the white kitchen’s surroundings.

Gareth Evans proves here that he truly is a filmmaker to be looking forward to. His evolution since his first film, not only as a filmmaker, but as a screenwriter, is really recognisable.

It is true that you may miss some action compared to the first film, but this is because the it takes its time in character and story, while the action is more fragmented To highlight a couple of sequences, I would like to pick the car chase and the final fight in the kitchen. Both the planning and choreography of these sequences are beyond spectacular.

In conclusion, “The Raid 2” is one of the best action films of the last couple of decades. This is a spectacle you cant miss and this film consolidates both the director Gareth Evans and his star Iko Uwais in the action film genre. If you haven’t seen it yet, I don’t know what are you waiting for.