After watching “Silver”, I was actually wondering if Miike have reached his nadir with this film, and whether his collaborations with Hisao Maki could turn out even worse. “Waru” provided an answer to both questions. 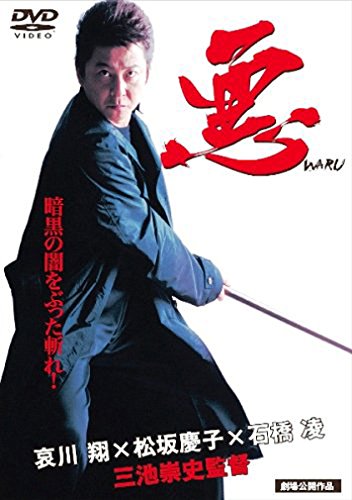 The once more paper-thin script is based on a manga by Hisao Maki and revolves around Himuro, an expert martial artist who fights enemies with a bokken, and his boss, Sarashima, whom he has formed a bond with during their common stay in prison. The two of them are targeted by a rival yakuza gang named Kyokuto. The leaders of the faction are obsessed with their targets, and have assigned one of their henchmen to this goal, who ends up with an eyeball gouged after his first failed attempts. The rest of the movie actually revolvesaround these repeated assassination efforts that result in various, mostly absurd action scenes, while a number of flashbacks introduce Himuro’s story, mostly revolving around his training by the only man who ever bested him, who happens to be played by Maki. And if you are not sure of what I just mentioned, yes, Maki wrote himself in the film as the strongest character in the story. A policeman named Sakuragi tries to stop all of them, but at the same time, no one in particular.

Miike directs a film that, again, seems like a collage of different genres, elements, and film tributes, with the protagonist bearing much similarity with Ogami Itto of “Lone Wolf and Cub” in the way he has to fight scores of enemies with his sword, while the whole Yakuza setting, and particularly the narration regarding events and individuals, is reminiscent of the “Yakuza Papers”. Of course, there is no comparison in terms of quality, while the rest of the movie seems as an effort to include as many exploitation elements as possible, in an effort to draw the V-cinema audience. In that fashion, a number of absurd battles (the jet ski one is a prominent sample) and characters (including a woman on an actual leash who seems to even enjoy the fact) are featured here, which seem to have almost no connection with each other, and even more, with the main story (what main story?).

In this setting, the rather interesting cast, headed by Sho Aikawa as Himuro and the likes of Ryo Ishibashi as Sakuragi, has almost no opportunity to shine, perhaps with the exception of the intro, which presents Himuro in a cult and cool way. Even the presence of Atsuko Sakuraba, who starred in “Silver” is not enough to save the acting aspect and the movie overall (at this point, I have resorted to plain irony).

Kazunari Tanaka’s work in the cinematography department is kind of interesting, particularly in the way that he presents the many different settings, but again, not anything special.

Not much more to say, “Waru” is one of the worst movies Miike ever directed, while the fact that, later that year, he shot a sequel, seems as pure audacity.