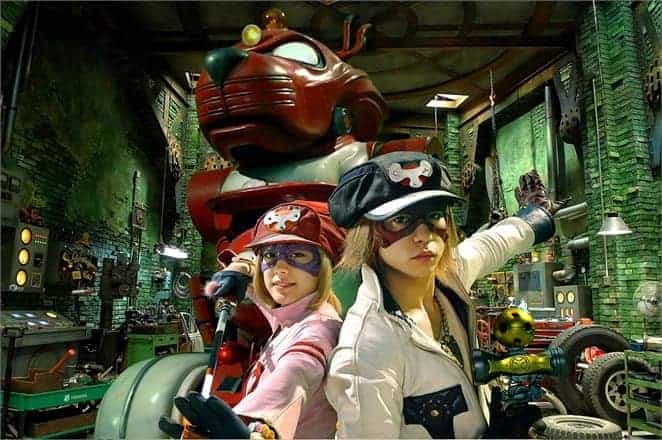 Toy shop owner Gan, uses his creative and outlandish deigns to create his super persona in “Yatterman”. Accompanied by his workshop assistant Ai, the two fight against the evil Doronbo Gang in a race to collect mythical fragments.

Yatterman is an adaptation of the 1977 anime series that ran a total of 108 episodes. Miike’s adaptation is the only live action version of the cult classic series.

Yatterman’s greatest success lies within its world building. The film has a consistent aesthetic in all visual and technical aspects of the production. The costume design in particular stands out as exceptionally well executed, with the constant outfit changes of the members of the Doronbo gang standing out the most. The segments that are computer generated are a bit rough. Although the CGI seems restricted by budget, it does match up well with the original character and concept designs. Also, given the comedic tone of the movie, it is hard to scrutinize the special effects. The film score mixes well with the visuals, keeping upbeat with the pace of the film. Looking at the technical aspects of the production, everything melds together in a pretty joyous fashion, which compliments the production.

The film somewhat falters in its scripting, creating a rather generic and predictable plot. It will feel familiar as it uses common tropes, and plot points that have been recycled many times over within the fantasy/action genre. This does not ruin the production, but for those who favor the more absurd and over the top visions of Miike, “Yatterman” is bound to disappoint.

The performances in Yatterman are serviceable, with each actor able to capture the cartoonish and campy nature of their characters. Given the rather generic script, it is hard to really fault any of the actors for not making a large impact. Kyoko Fukada, who plays the leader of the Doronbo gang, does stand slightly above her fellow cast. However, Fukada stands out given her character has the most depth, range of emotions, as well as most colorful outfit changes.

Within the film exists one negative that is really hard to get over, especially approaching this as a fan of the director’s filmography. The production really lacks a lot of flair that creates talking points, or moments that heighten the overall production into the realm of cult status. Within every Miike production, there seems to exist a few scenes which will stick with viewers for years to come. “Yatterman” exists as kind of a forgettable outing, something that can be enjoyed in the moment, but lacks any real staying power. The film is bound to become awash in countless other live action adaptations in the viewers memory. Ultimately, “it is passable entertainment within the filmography of Miike, but is a departure from his most revered work.

Miike is no stranger to anime adaptations, and although Yatterman rests more in obscurity compared to some of the others, mostly due to unfamiliarity in the west, this production serves as one of the better adaptations Miike has worked on. Although, the success works by taking a property that existed to appeal to a younger audience and keeping the same tone, while throwing in some subversive adult humour. This allows different degrees of entertainment depending on the age of the viewer. The production’s ability to create a diverse appeal, exists as one of the major draws, since Miike is normally uncompromising about throwing in more explicit content.

My time with Yatterman was enjoyable, but even with my viewing there was some awareness that the film would fade in memory with time. It definitely does not leave a strong impact like a lot of other of the director’s projects. However, it was nice to have the experience of a more light-hearted Miike production, and I think the ability of it to appeal to various age ranges could make this enjoyable. This is the type of film that I would like to share with my nephew once his reading skills are up to the task, which is the greatest praise I can give this live action adaptation. For fans who are looking to conquer the arduous task of going through all of Miike’s work, I think this film would be a pleasant surprise and a nice break from the regular doom and gloom that exists in the bulk of the director’s filmography.