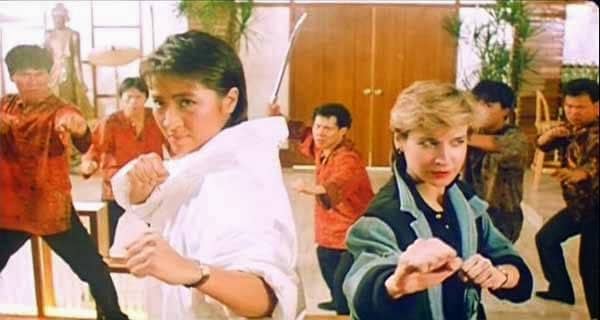 During the heyday of the 1980s, Golden Harvest Studios sought to tackle the void left in the scene with the lowered priority kung-fu flicks, from The Shaw Brothers. They quickly established themselves as major players with a series of female-driven films that made stars of a crop of explosive talent, ranging from Yukari Oshima to Cynthia Khan, Moon Lee and the stars of the film that kickstarted the genre, Cynthia Rothrock and Michelle Yeoh.

Investigating a local politician appearing in Hong Kong, Inspector Ng (Michaelle Yeoh, from “Supercop”) realizes that her charge has been killed and finds Asprin (Mang Hoi, from “Pedicab Driver”) and Strepsin (John Shum, from “Winners and Sinners”) involved. Tracking them down to their friend Panadol (Tsui Hark, director of “A Chinese Ghost Story”), she uncovers that they hold a piece of evidence to the case featuring an important microfilm that incriminates a local Triad leader Tin Wai-keung (James Tien, from “The Big Boss”) in various criminal activities. When Inspector Carrie Morris (Cynthia Rothrock, from “Lady Dragon”) continually interferes in the proceedings, Inspector Ng learns that the dead man in her charge was an undercover agent working for Scotland Yard. which explains her continuing show up around their interactions. Realizing that they must team-up to deal with the multitude of thugs and henchmen on their trail determined to get the microfilm back, the two detectives put their differences aside to deal with the dangerous criminals.

One of the greatest attributes about the Hong Kong action scene in the mid-80s was gender revolution. Women were granted the ability to lead martial arts films that were predominately male-oriented in the past and performed stunts and kung-fu battles that showed an athleticism that rivaled many men. ‘Yes, Madam!’ is the very first film in this revolution that sparked the Hong Kong action scene and led to numerous inspirations, copycats and ripoffs that were well-intentioned because this is worthy of such homage.

It all starts with the two leads. Michelle Yeoh as Inspector Ng and Cynthia Rothrock as Inspector Carrie Morris are incredibly fun together and create a dynamic duo. Both are at their physical peak and demonstrate jaw-dropping skills in their battles. From the moment Rothrock arrives at the airport and puts down the thug single-handedly that got past several regular guards just before, Rothrock’s flexibility and coordination is on display in fine form. Yeoh also gets a few fine battles early on to show off her skills, and even puts in a fun gunfight mid-way through that gives her more to do. Still, the movies’ centerpiece sequences are about the both of them on-screen together engaging in spectacular hand-to-hand fighting. A 2-on-1 battle with Dick Wei in a crowded nightclub bathroom that spills out into the arena is a showstopper, while the final battle in the gang members’ compound is a delight to watch. Each one going one-on-one with a major henchmen and being full of precise timing and choreography from star Mang Hoi, gives the scene a resonance not easily matched in the genre.

Naturally, the story here isn’t that great. A Maguffin captures a criminals’ illegal activities, it falls into the police’s hands, both sides battle each for the object. It’s not the strongest story, but it works to generate some nice performances. Yeoh and Rothrock are both no-nonsense policewomen determined to uphold their duties but are sympathetic to each other and have a solid chemistry together. The henchmen, led by Dick Wei, give suitably appropriate one-note performances that lend a menacing air as well as being able to hold their own in a fight. Sham, Hoi and Hark all turn into a riff on The Three Stooges troupe as they give hilarious performances, although the comedy will certainly depend on the viewers’ preference.

That last point, in a nutshell, is the films’ major weakness. The comedy aspect of the film is the true definition of hit-or-miss. Major sections drop the police investigations entirely in order to focus on the bumbling criminals. The hilarity of their antics is somewhat dependent on the individual viewer, as they’re portrayed like typical bumbling criminals. Given chop-socky accents and engaging in constant slapstick pratfalls, there’s a lot pinned on this appealing to viewers thinking it’d be funny. Regardless of how much one laughs at their antics, this still dominates main parts of the film and really leaves the pace somewhat uneven. Likewise, there’s also how it feels going against the brutal action elsewhere in the film. The change of tone is striking and this doesn’t feel like they belong together in the same movie with all the violent kung-fu action throughout here. However, it’s pretty much all that holds this back.

Overall, this is a stand-out effort of the female kung-fu driven films from this era. The parts that matter, the action scenes and beatdowns, are handled with violent, fast-paced choreography that are immensely appealing and it holds up quite well. This is a no-doubt effort for fans of the cast, the creative crew or general martial arts fans.

Intimate Confessions of a Chinese Courtesan (1972) by Chor Yuen