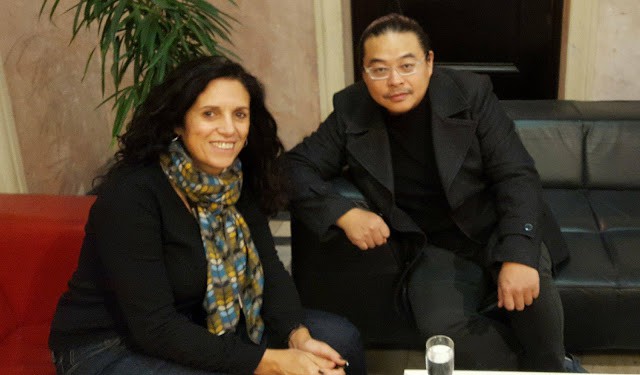 Born in 1974, screenwriter and director, graduate of Beijing Film Academy, member of the Sixth Generation of Chinese filmmakers. His graduate short feature won a Cinéfondation award at Cannes IFF in 2001. His debut feature, “Passages,” also premiered in Cannes and received a Special Mention. Making “Crosscurrent” took him almost 10 years.

The concept for the film was created in cooperation with cinematographer Mark Lee Ping-bing (known from Wong Kar-wai’s “In the Mood for Love,” and Hou Hsiao-hsien’s “The Assassin”). The film brought him a Silver Bear at this year’s Berlinale.

On the occasion of Crosscurrent screening at Five Flavours 2017, we speak with him about the long process that brought the film to life, the Yangtze River and Science Fiction genre.

We know that Crosscurrent took almost 10 years to be realized. Can you tell us a bit about the structure of this long process?

The first six years of my work were spent basically scouting for locations and travelling around the Yangtze River, trying to find the right places and basically getting the feeling of the place, so the actual work on the film took only four years. During the first phase, I was also writing the script but that was developed after, during the four years, as this is the way I work. One more reason why the filming took four years to be completed is that it was a very difficult process, as we had to physically spend time on the river. Another problem we encounter was the funding, in the end we managed to find an amount of money that was enormous for the standard of Chinese art house cinema, but initially we had lots of trouble with money.

And during the four years of filming, was it hard to keep the crew motivated for such a long time?

Yes, of course it was very difficult, but the actual filming time was about three months all together, spread across five periods of time, so it was a bit difficult to gather everybody again every time. Additionally,  we didn’t have lots of money and so we couldn’t convince the crew with retribution, but we did it talking about the deep meaning of the film, and it actually worked all the time and we succeeded to convince everybody to come back and finish the film.

The Yangtze River has a deep meaning in Chinese history, culture and folklore, it is also the center of your movie. But can you tell us about your personal bond and experience with the River?

I grew up on the bank of a very small river, an affluent of the River Huai, in the North of China, and ever since I was a little kid, although I couldn’t swim, observing that little river, I always thought the water is something really inspiring, mysterious and interesting. It wasn’t until I went to University and I move to another city – Wuhan – which is one of the biggest port on the Yangtze, that for the first time, on the train, passing over a bridge  I saw the River and I was so impressed, it really fulfilled all the expectations that I ever had of a huge area of water and even now, every time I travel and I happen to cross rivers, I always look at them and they make a very deep impression on me.

One aspect of your film that was highly praised is the stunning visuals. Can you talk about the process to realize that?

There are two very important aspects about it, the first one is that we actually lived on the river, the whole crew was stationed on one of the boats, so we were extremely close to the reality of the River and we were able to film it all. And the second important aspect is that we filmed everything in winter, because I believe that the way the river and the surroundings look in summer or in the warm season doesn’t really pay tribute to these kind of river colors. So, I really wanted to be filming in the cold period even though it was actually more expensive for the production because it required more funding for things like the heating on the boats. So for me was very important to film in winter with the winter colors and shades.

I have heard a story about this movie, that because of its long time of realization, the availability of Kodak film run to an end during the filming, just enough to complete “Crosscurrent”, making it possibly the last Chinese movie on film. Is it true or is it a legend?

The Kodak actually still produces film, but what is interesting is that the last factory specialized in developing films in China stopped working almost when we were finishing with the film and so it is true that this is probably going to be the last Chinese film made in this way and to be honest we were in trouble after that factory closed down and we had to finish it in digital, so about 10% of the movie is digital.

When I saw the movie, I was very impressed when the boat arrives at the Three Dams and passes the locks and there is an amazing sound effect and the huge lock walls with all the creaking and dripping noises reminded me of a dingy spaceship in a Sci-Fi movie. Than later I read somewhere that you are a Sci-Fi fan so I was wondering if there is the connection I had imagined.

Yes, you are right, you spotted it! I am a great fan of Science Fiction literature and films and actually originally I wanted “Crosscurrent” to be a Science Fiction film.

Oh Wow! And what are your favorite Sci-Fi movies?

“The Matrix”! But I think that the current level of movies is not as good as the one of novels, so I prefer to read novels, for example “Arrival” (the original novel is “Story of Your Life” by Sino-American writer Teddy Chiang) and I also love lots of American science fiction writers.

One criticism to your film has been that it is a bit obscure and cryptic. Did you want to leave room for the audience to interpret it or do you consider the story your own property?

It is obviously a great challenge for the audience watching the movie, as the story unfolds from the ending to the beginning, a very unusual way of storytelling, but it had to be challenging, that was the original plan. Also, we tried to shoot the film through the eyes of the main character so that it resembles the journey of this one person and even though he is traveling twice, it all blends into one in the end.  I think it will definitely be very difficult, especially for the audiences outside of China, but we thought about it and we decided that that is actually one of the most interesting thing about the movie. Another problem is that originally my idea was to make every port different so that the audience could see more clearly that the time had changed from the point of arrival to the next one, but unfortunately, due to the limitations of funding we couldn’t do it, therefore it became more difficult to understand the flowing of time in the film. We only managed to obtain half of the funding I had hoped for, even though it was a lot for a Chinese art-house film. I really envy the directors of “Bladerunner” and “Arrival” that had all the money to do whatever they wanted and realize their ideas.

Is there any particular part of the film you are really proud of?

Yes, there is a part where the two main characters, the man and the woman, are on the edge of the river and there is this small tributary that folds running back and forward between them and the camera only casually reveals there is another person in the shot. Some of the audience can spot that quite early on while other people don’t realise it until it’s more exposed on the camera and that is why I’m very happy about it, that everybody at their own pace can understand that scene.

Probably my next film will be a Science Fiction movie!