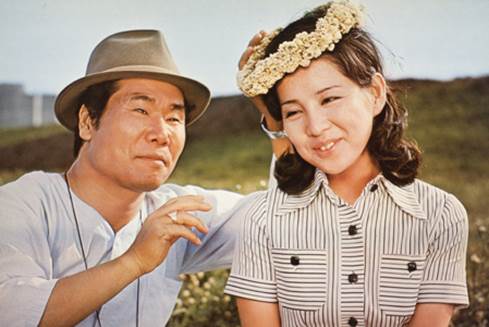 Tora-san (Kiyoshi Atsumi) emerged as Japan’s comic, penniless anti-hero in 1969, when yakuza superstars such as Ken Takakura and Yujiro Ishihara dominated the screen, and remained a beloved icon for more than 25 years. The 48-part Tora-san series—the longest running in film history—chronicles his life as an unruly yet endearing salesman, traveling through a rapidly-modernizing Japan. Over the years, Tora-san has become an emblem of a simpler world, winning over audiences with nostalgic charm.

In celebration of Tora-san’s 50th anniversary, Japan Society invited Japanese architectural firm Atelier Bow-Wow, curator and exhibition designer of Made in Tokyo: Architecture and Living, 1964/2020 (opening at Japan Society on Oct 11), to select newly restored and subtitled favorites from the series.

In this second installment of the popular series, made in the same year as the first film, Tora-san returns home to Shibamata, Tokyo, where he meets his sister’s newborn child, bumps into his old teacher and falls in love with the teacher’s beautiful daughter Natsuko (Orie Sato). After learning that his long-estranged mother (a geisha who had a brief affair with his father) may still be alive, Tora-san sets out for Kyoto in search of lost time. New 4K restoration. DCP, color, in Japanese with English subtitles. With Kiyoshi Atsumi, Orie Sato.

While passing through the historic city of Kanazawa, Tora-san encounters three young women on vacation who all take delight in his boisterous hijinks, especially Utako (Sayuri Yoshinaga). When she shows up in Shibamata for more entertaining distractions, Tora-san is more than delighted to oblige his newfound “Madonna,” but Utako soon confides that her father refuses her marriage to the man she loves back home. Heartbroken yet ever-well-intentioned, Tora-san resolves to set the matter straight. New 4K restoration. DCP, color, in Japanese with English subtitles. With Kiyoshi Atsumi, Sayuri Yoshinaga.

Japan Society Film offers a diverse selection of Japanese films, from classics to contemporary independent productions. Its aim is to entertain, educate and support activities in the Society’s arts and culture programs. For more, visit japansociety.org/film.