Based on Koshiba Tetsuya’s yet another “look-at-the-busty-slim-teenage-girls-in tight-shirts-and-short-skirts” popular manga comic series, Miike Takashi’s TV movie in 2 parts “Yuya of Yokohama: Tennen Shojo Man Next” is a typical child of the 1990’s with lots of cheese topping for teenagers drawn to romanticised vampire flics. It’s a compressed vampire boy-meets-girl-and-changes-forever narrative, usually condemned to countless televised seasons of series called something like “The Bite of Love” or turned into a franchise as terrifying as “The Twilight Saga”. Luckily enough, it’s a Takashi Miike film, and although half-heartedly directed, “Man, A Natural Girl” contains typical elements of his films as we know and cherish them. One of them is the twisted sense of humor, dry and hilarious, sprinkled all over the story-line like a fine layer of sugar powder. The scenes in which a gang of vampire girls cover their ears in horror when the music changes from the Japanese indie rock to a romantic ballad, or when Yuuya (Takashi Nagayama), his soul being saved by the main female hero Man (Ayana Sakai), gets catapulted into heaven nailed on the giant illuminated cross, make it worth riding the ride. 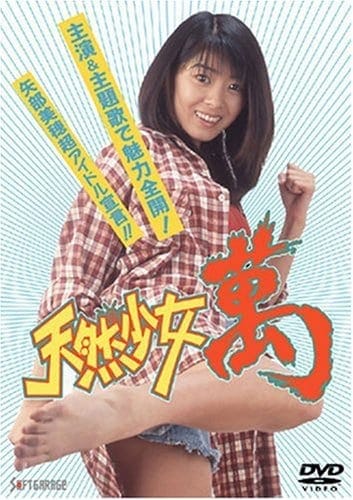 “Man, A Natural Girl” ” starts with the introduction of an all-girl group of friends, dressed in typical school uniforms. As we watch them doing what teenagers usually do, one of them – Man, is slowly standing out as an expert in martial arts. We see her transforming from a sweet teeny into a kick-ass machine, when she beats up some bad fellows into a pulp after they overstep the line. She is the Japanese Buffy the Vampire Slayer, long time before even realising it fully with discipline and intelligence which serve her as protection shield in situations where nothing else can really help.

The plot starts cooking up when a couple of girls suddenly start changing their behaviour due to the inexplicable sudden success as top models. From amicable, their characters turn nasty and cold, but also their looks – pretty girls are now stunning, unapproachable beauties. The secret that surrounds them is that the Yokohama’s prestigious model agency “Saints” they got under the contract with, is actually the headquarters of Saint Vampires, the only truly immortal among the undead. Their mysterious “God”, a bewinged creature hidden behind curtains, decides upon the destiny of newcomers, locking them through his agents with promises of eternal power and beauty. Some are kept as in-between beings, a form of vampires whose longevity is limited to 500 days after they were turned, and some are promoted to higher ranks. The latter are mostly men, as women seem to be the source of all evil in the past lives of Saints. It’s a little kingdom of revengeful guys who were left by their mothers or “treated like dirt by their girlfriends”, as is the case with the most ruthless of them – Satoshi (Satoshi Matsuda, our mister Kamen Rider Knight Ren Akiyama) who is recruiting virgingirls to make the world full of vampires. The business with finding teenage virgins isn’t running that smooth as one might presume, and not only Satoshi, but “God” himself are losing their patience over weak hearts of some fellow vampires who fall in love and hesitate to bite the few remaining “pure hearts”.

Thanks to the famous male model and heart throb Yuuya (Takashi Nagayama), the escaped game is substituted by new candidates, cueing to date the guy of their dreams. Little do they know about his contempt for the opposite sex that sits deep since he was orphaned at the age of five. His attachment to another orphan, a little boy called Taichi (Kazuhiro Sakai), who’s bullied at school, will lead him to find the first-time connection to a girl, who happens to be no one else than Man. Miike’s humour strikes again in Karate Kid reminiscent sequences in which Man coaches Taichi in things self-defence. It is very unlikely that we would see in any other commercial TV film  a well-meant tutor setting up the fire to the canister full of gasoline below a head of the kid hanging upside down, just to teach him fast reacting. These types of interventions save the day in a film with such overly poor special effects, that they probably make the original makers of the Teenage Mutant Ninja Turtles (Steve Barron, 1990) green with envy. The oversized (and somehow always full) moon and a giant Ferris wheel that appears strangely attached to it are either in very blue or bright red hues and the lightning punishing the disobeying vampires look like Miike’s intentional vision of fun.

Of course, love and goodness win the game, as they do in televised, audience-friendly no-sex, just sex talk films aimed at very young audiences and we can live with that as long as bad ballads are the weapon and beating is well choreographed. Needless to say, this isn’t the best coming from the director who gave us too much genius to handle in the previous ten years, but it is a film you will enjoy watching slouched on your couch, curing the last night’s hangover.

Worth the praise is the music by Miike Takashi’s long-time collaborator Kôji Endô who picked up the incredible palette of tracks from Japan’s music scene to set the tune to the story. Another magic touch comes from the screenplay by Itaru Eda, based on the adapted story by Yûji Ishida, which strips off the corny from the original comic.