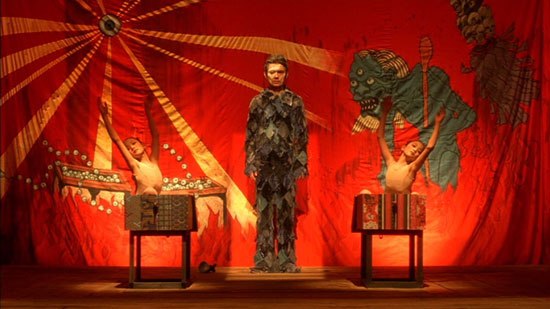 Kyoko (Kyoko Hasegawa) is a successful novelist whose latest work is especially popular among readers. However, despite her popularity, Kyoko feels somewhat empty and haunted by the memory of her twin sister Shoko (Yuu Suzuki) whose demise, caused by Kyoko herself, has been the cause of numerous nightmares.

Feeling guilty for having left her for dead, Kyoko travels back to the circus tent where she performed together with Shoko and their benefactor Yoshii (Atsuro Watabe) only to find the past is anything but dead but lurking within the insides of her sister’s last resting place. 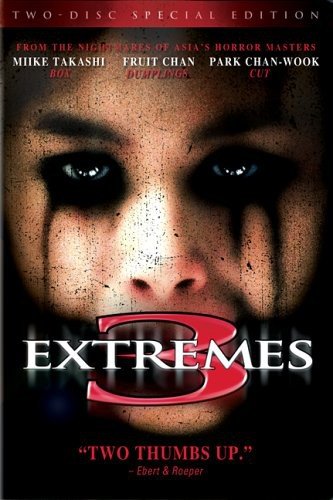 Following the concept of the omnibus film “Three” (2002) which featured the works of Peter Chan, Kim Jee-woon and Nonzee Nimibutr, “Three … Extremes” consists of short films by various Asian filmmakers dealing with the general subject of extremes. After “Dumplings” by Fruit Chan and “Cut” by Park Chan-wook, Japanese director Takashi Miike’s “Box” concludes the omnibus film with a tale about deception, sisterhood and guilt. Internationally the project proved to be quite a success for its makers with many critics praising the various segments for their inventiveness and use of the medium. In a year which does not contain the strongest entries within Miike’s diverse body of work “Box” stands out as an utterly creepy, yet strangely beautiful short film.

Also thanks to the script by Bun Saikou and Haruko Fukushima, the overall narrative of “Box” is just as labyrinthine as the elaborate patterns presented on the infamous box. You will find yourself having trouble pinpointing reality from dream as the film adds many different layers, all of which combined with the aforementioned themes, the strongest of which the bond between the three main characters. The darkly beautiful cinematography by Koichi Kawakami supports the feeling of confusion between what is real and what is part of the dream, adding a psychological dimension fitting to the mixture of guilt and regret Kyoko feels.

At the same time, Miike’s film embraces what is essentially a chamber drama consisting of the three main characters. Considering the highly subjective nature of the narrative, its unreliable way of telling a story, the relationship between Kyoko, Shoko and Yoshii changes from affection to physical love. However, these “extremes” are, which is quite unique for the director, never explicitly presented to the viewer, but remain the parts of a multi-layered puzzle the audience will have to solve.

In the end, “Box” is a strong, visually stunning short feature, a great achievement for those involved and, at the very least, a fitting conclusion to “Three … Extremes”. On its own this “extreme” will haunt the imagination of the viewer, leaving a permanent impression and an important insight into the talents of a filmmaker who is often reduced to the sensationalist, violent cinema he has created in his career.