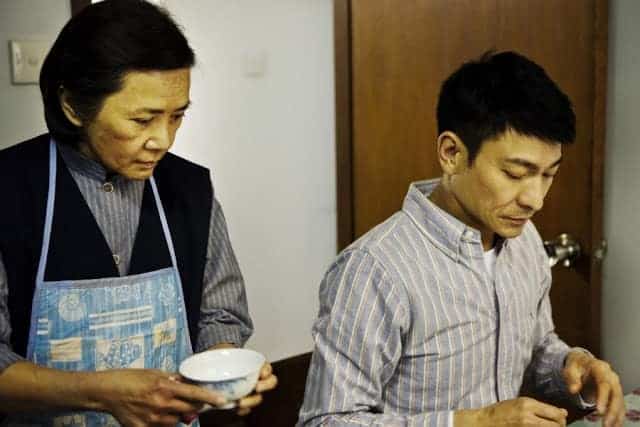 Based on the real story of producer Roger Lee’s maid (amah, in Chinese) Ah Tao and directed by Ann Hui, “A Simple Life” has been an immediate success, despite dealing with a difficult and not-so-charming subject matter. Boasting incredible performances by two big stars, it earned Deanie Ip the prestigious Coppa Volpi Award at Venice Film Festival and re-boosted her career. The film then went on to win a plethora of other Awards.

At the center of the story lies Ah Tao. Orphaned in very early age, she has been with Roger (Andy Lau) and his family for many years, way before Roger was born, and she has been raising the children, feeding them and caring almost as a mother. Now Roger is the only member of the family left in his Hong Kong family home, as the rest of the family is in the US. A busy film producer/accountant and a bachelor, he is still looked after by devoted Ah Tao, who cooks for him as we see in many scenes and take care of the house. The two have a mutual understanding and ingrained dynamics that we can spot in little gestures and in their almost silent life-routine.

But age takes its toll and one day, after suffering a stroke, Ah Tao, sensibly, announces her retirement. With her usual modesty and discretion, she doesn’t want to be a burden and, not having her own family, she is planning to go to live in an old people’s home. In a role-reversal move, Roger then decides to take charge of her future years, searching for a suitable facility and paying for it.

From this point on, the movie focuses on the retirement home and the change in the relationship between Roger and Ah Tao, a love that has always been there and is given back to who fully deserves it. Roger will help her go through her final years and making her retirement lighter with even few touches of fun and frivolousness.

“A Simple Life” has a simple story but, nevertheless, is full of authentic emotions. Understated and touching, this movie is about bonds that go beyond blood and the affection that makes a simple life so special. It is also about two lonely souls reaching out for each other in a world where real emotional ties are hard to keep.

With an incredibly light touch, the director brushes past few important social issues like class divide and old people care but they stay firmly on the background. As many of Ann Hui’s best movies, this one too is a compassionate portrait of ordinary lives, executed with a steady hand and no slips into sentimental mud.

“A Simple Life” producer, Roger Lee, is the real-life Roger and he wrote the script basing it on his own family maid. It is a heartfelt tribute to the real Ah Tao as well as an affectionate homage to a disappearing figure, the Amahs, women that not only in China but also in many other countries, were employed as live-in helper and nannies, often coming from the poorest countryside, and dutifully devoted all their life to other people’s families.

Being mainly a character study, the film is centered on the performances of the two actors and their mutual interchanges. Andy Lau plays Roger with an ease that may surprise, considering his very different usual roles. He is understated and somehow distant and this detail shows even better the spontaneity of his connection with Ah Tao. Deanie Ip as Ah Tao delivers a terrific performance that looks incredibly effortless. Her portrayal of Ah Tao is rich of composure and subtly nuanced, peppered with stubbornness, pride and fussiness too.

The fact that Roger is a film producer in the story (as well as in life), is an occasion to place here and there few very enjoyable cameos of real Hong Kong movie people as themselves, like Raymond Chow, Andrew Lau, Tsui Hark and Sammo Hung, Moreover, other big names like Antony Wong and Chapman To appear in minor roles.

In harmony with the realism of the movie, the cinematography by Lik-wai Yu is devoid of excessive sparkle and adopts a toned-down palette that adequately matches the understated mood. Minimalist and rigorous in an honest and concrete way, just like Ah Tao.

“A Simple Life” is a movie that restores hope and trust in humanity and in love coming in unexpected forms, and is a glorious display of the best of Hong Kong cinema.