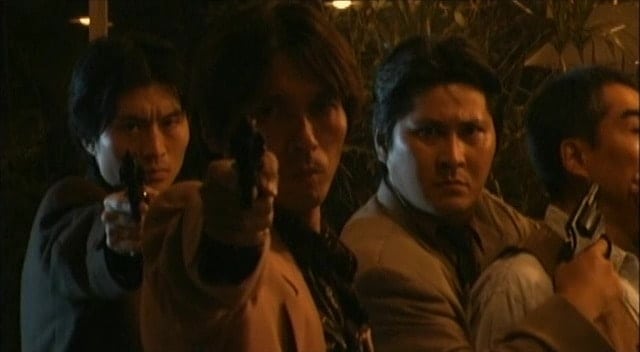 Takashi Miike returns once again with a wild and violent story of yakuzas in “Family” and “Family 2”, adapted from the manga of the same name written by Hisao Maki. A story divided into two parts, which the second one continues exactly where the first ended; therefore you can speak in a general way of the two films as a whole, since they share everything. The result is however not so satisfactory as one would expect, because the outcome and the trip itself ends up being disastrous. Both films, although the first one more than the second one, are the result of a terrible script, in which it is difficult to find logic most of the time. If we add that no character ends up being of interest, then we have a quite poor movie (or movies) in which you will want for the end credits to come as soon as possible.

“Family” starts with Iwaida of the Nishiwaki in a debt-collecting mission. He does not find the debtor so he rapes the debtor’s wife Haruko while her husband and young son Takashi hide secretly in the closet. The husband later gets drunk during the daytime and gets into a fight with some street thugs who beat him to death. His older son Hideshi finds these thugs who took his father’s life and hits them to death. Years later, the famous yakuza leader Iwaida Nishikawi, the same one who raped that woman years ago, is assassinated. The killer is a famous hitman named Takeshi (Taisihû Kase), and from this event, the lost brothers of Takeshi (Takashi and Hideshi) will try to find him to protect him, although Takeshi himself will flee trying to find a nurse who witnessed the murder.

As some say, the movie was going to be thought to be one whole movie, and it ended up being divided into two parts, and in fact, it is something that shows too much. The movie starts having more or less sense, but after a while the viewer is already exhausted from seeing how things happen without apparent logic. Hisao Maki, screenwriter of the “Bodyguard Kiba” and “Silver” films, is the one in charge of the script here, something that already explains many things. It is no accident that every time Miike has collaborated with Maki, the movie has ended in disaster, and “Family” and “Family 2” are no exceptions.

Additionally, the look of the film looks horrible, and I’m not speaking only of the cinematography itself (where Miike himself took part alongside Hikaru Yasuda), because we are used to watching low budget direct to video films from the first years of Miike’s filmography. It is the whole ensemble itself, the poor framing, the darkness of the entire imagery, the total extravagance of the story and the plenary nonsense of it that makes the viewer to not stand it past some time. It has some good and salvageable moments, of course, but not even Miike himself is able to save the mediocrity of “Family” and “Family 2” from the disaster.

On the other hand, the performances may be the most salvageable thing, apart from some action sequences. We have actors like Taisihû Kase, Kôichi Iwaki and Kazuya Kimura giving life to the trio of brothers who will be in front of the screen most of the time, and at least they do a good job. Ken’ichi Endô also has an important role in the film, something that is more than welcomed, as it is always a pleasure to see him act.

In short, “Family 1 and 2” does not contribute anything new to the genre nor to any movie you have seen from the director, so nothing will happen if you miss it. It is only worth watching if you want to experience entirely the extensive filmography of the great Takashi Miike.