Perhaps South-Korean director Kim Ki-duk knew the kind of backlash a project such as “The Isle”, or “Seom” which is the film’s original title, would have to face internationally. Even though audiences and critics understood the artistic quality of the film, for example, when it was screened at the Venice Film Festival. In his review of the film, acclaimed critic Roger Ebert wrote:”This is the most gruesome and quease-inducing film you are likely to have seen. You may not even want to read the descriptions in this review.” For these reasons, its depictions of violence and instances of animal cruelty, the film achieved a certain notoriety over the years. 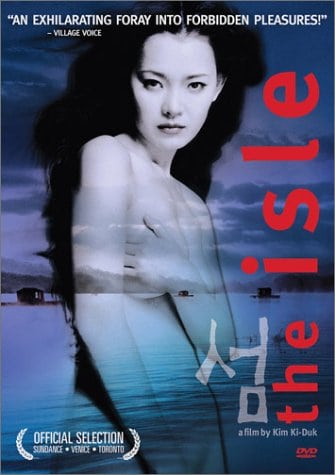 A young, mute girl named Hee-jin (Suh Jung) is the caretaker of a fishing resort. Her tasks include renting the various floating cottages on the lake as well as taking care of the needs of the costumers from fishing hooks, to booze, to the occasional sexual intercourse. Despite the noisy men renting the cottages, she lives a quiet life, not bothering anyone but also undisturbed by others as well.

However, the harmony at the resort is disrupted with the arrival of Hyun-shik (Kim Yoosuk), a man who has killed his wife and seeks refuge in one of the cottages. Out of curiosity, Hee-jin attempts to find out more about this strange newcomer who she finds crying in his cottage once and who seemingly has no interest in fishing as well as the company of the other men. Although he pushes her away and abuses her, both of them realize the powerful connection between them.

Considering the controversial nature of the film itself, you may be inclined to view Kim Ki-duk’s work through the lens of this particular framework. However, it might be necessary to take a look at “The Isle” also within the thematic context of the director’s work which – up to this day – has been defined by issues like human interaction and its shortcomings, minimalism and the relationship of man and violence. Above all, Kim Ki-duk is an artist walking a thin line between beauty and gruesomeness, often blending both aspects as you can observe in the bloody, yet somewhat metaphorical nature of some of the more violent scenes of the film.

Harmony, a lush landscape and violence go hand in hand in the narrative universe of Kim Ki-duk, a notion already present in previous features like “Birdcage Inn” or “Crocodile”. In “The Isle” the beauty of the landscape is geographical only on the surface, while also providing a fitting mirror to the character’s emotions and sexuality, which might also explain the change of seasons and weather during the film’s action. In many ways “The Isle” can be seen as a precursor to the director’s “Spring, Summer, Fall, Winter … and Spring”, a perhaps even richer examination of the thematic and narrative aspects of “The Isle”.

Considering the director’s predilection for mute characters or minimalist dialogue, Suh Jung’s and Kim Yoosuk’s characters fit the profile. Even though he would reduce a character’s backstory even more in his future works, there are still enough question marks in their past to give them a sense of mystery. Especially Hee-jin seems more like a mythical figure, a blend of Greek siren, Medusa and mermaid, a child born out of nature who only briefly contacts the outside world. Her longing for love and companionship estranges people like Hyun-shik since he knows what kind of actions intense emotions can lead to. Given the aforementioned lack of dialogue, both actors admirably master the challenge of presenting these emotions and developments largely without words.

“The Isle” is a blend of love-story and drama by one of the most interesting artists from South-Korea. While there will still be controversy surrounding some of the scenes of the film, the artistic appeal, the astounding beauty of cinematographer Hwang Seo-shik’s images and the bold acting make “The Isle” a noteworthy work in the director’s filmography.