Exploring his past through family photographs, home video and interviews, Alvin Tsang looks at what he sees as pivotal moments in defining his own view of family. From migrating from Hong Kong, his parents’ divorce, reuniting with siblings, to his sister’s wedding, Alvin Tsang delves into his past to help define the present. 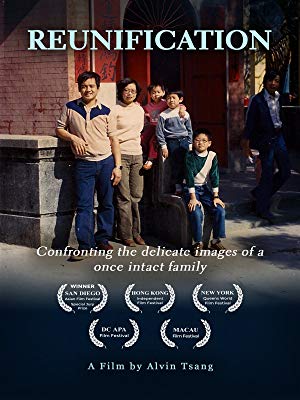 “Reunification” succeeds as an introspective look at one’s own past by working with universal themes and messages which can appeal to a broader audience. Even though Alvin’s family is unique to him and his experiences, certain concepts, such as changing perspective of your own parents as you begin to mature, touch on something that almost every introspective individual will come to terms with at some point in their life. The production does balance well universal messages of the strength of family, while still keeping the content feeling unique to Alvin’s own understanding of life. It is a delicate balance, in which “Reunification” navigates swimmingly.

Visually, the production is lacking, given it is told through family photos, interviews and family footage, it does contain as much excitement as sifting through an old photo album of people you don’t know. Granted, Alvin Tsang edits everything together in an exemplary style for a production exploring family. A prime example exists in a sentimental cut where he plays out the fantasy of his parents reuniting just to both be present at a family event. Given the great editing and choices of material, there does exist some charm in the visuals, but it is definitely limited by itss source. Overall, the visuals are definitely not the focus or draw of the production, but will act to hinder the enjoyment for many.

It will become apparent to viewers what they are getting into within the first few moments of the production. This is bound to make some viewers turn away within moments of starting. However, they would be best served to try to stick with it and try to absorb the stories and interviews. Although the production starts off feeling personal to the point of isolating the audience, Tsang begins to tie in both historical moments and universal messages to elevate “Reunification” beyond being self-indulgent.

I will admit my first impression was rather negative, feeling that the project would be too personal to garner interest. However, as ‘Reunification” progresses, Tsang does manage to turn the narrative into a larger universal understanding, and I found myself relating with some of his words, despite having drastically different upbringings. The strength of the production lies in taking his stories and life lessons and applying it to your own family dynamic. Ultimately, the film succeeds in making the audience take an introspective look at their own life, through masterfully framing his own.