The film revolves around two men, who seem to be living in different timelines. The first one, Kaito, is living in the present and is a writer for a political magazine with a nationalistic line. Despite his seemingly regular persona of a dedicated employee who occasionally drinks with his friends, he has another, quite dark and perverse one. He keeps stalking Kuniko, an ex-colleague in university he used to have an affair with, who is now a very successful author. Furthermore, he has regular sex sessions with Yumi, a prostitute, where he is dressed in a Japanese military uniform and she is made to act in various, submissive roles, at least when he is not masturbating with a tube-like gadget. Even more than that, he seems to hide a rage in him, which is bound to be released at some point. This moment comes when a colleague declines his invitation to dinner. 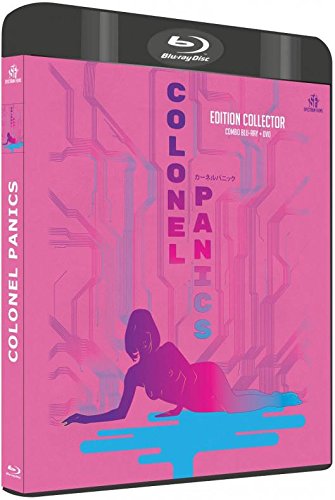 Nagisa, the second character, lives in the future and is a freelancer VR technician (who also masturbates with a similar, but more futuristic tube) who is tasked with the debugging of a virtual reality game titled LEVEL 4. However, as a malevolent virus spreads through the game, which is revealed as a program that “jacks into people’s minds and messes around”, the borders between virtual and actual reality, dreams and reality and, most of all, past and future seem to disappear, thus connecting the two men.

In distinct cyberpunk fashion, Cho Jinseok writes and pens a script that becomes quite difficult to follow, particularly due to the tactic mentioned in the previous paragraph. For their most part, the two axes are relatively easy to follow, but when they start interconnecting, the film becomes somewhat confusing, in surrealistic fashion, with the fact that the same actor plays both roles definitely playing a role in the matter. The sense of “misdirection,” though, seems to fit the general aesthetics of the production, which focuses on the visual aspect, at least as much as on the script.

In that fashion, the technical aspect of the film is astonishing, headed by Tetsuhiro Kato’s cinematography, which presents a number of impressive images, both in Kato’s realistic environment and Nagisa’s futuristic. The scenes where the two settings merge are also impressive, as they switch from dreamy to nightmarish sequences. Kato also uses an impressive technique where the camera lingers, following the sight of the individual who stalks Yumi, making the viewer feel as if he is actually the one watching through the stalker’s eyes. Evan Finn’s visual effects also move in the same direction, while Yoshihiro Nishimura’s presence in the makeup effects, along with Kazuhide Shimohata, gives the violent scenes a fitting exploitation sense. These scenes, that become quite frequent after a fashion, are the ones that give the film a sense of grotesqueness, in very bloody fashion, and in combination with the many scenes of nudity and sex, the exploitation element.

However, Cho Jinseok also managed to communicate a number of messages regarding very serious topics, as is the situation with nationalism in the country, the conflict with S. Korea regarding the case of the comfort women during WW2, and the future of art in connection with technology.

The film also features a number of sequences with kaleidoscopic videos, similar to those of screen savers, and a number of datamosh scenes. The editors, Shinichi Fujita and Gregory Fitzsimmons, use these sequences frequently in order to change the setting, in a tactic that works well occasionally, as it signifies that some error is occurring in the VR environment. After a fashion, though, particularly the datamosh effects become a bit tiring, especially in a scene close to the end where they last for quite some time. Fabrice Viel’s music, which moves between electronic and noise, fits the film perfectly, and the same applies to Ugo Derouard’s and Takenori Misawa’s digitalized sound.

Yusuke Miyawaki gives a great performance in a double role as Kaito and Nagisa. The fact that these two characters are radically different, with Kaito being a “loser” who turns into a psychopath, and Nagisa an extremely cool individual, who even has the ability to snob large corporations, make Miyawaki’s accomplishment even more impressive. Gorgeous Tia Tan who plays both the prostitute and the future cyborg does not have many lines, but definitely leaves a lasting impression with her roles. Satomi Hiraguri as Kuniko emits a cold and serious beauty, while her imposing voice works quite well in the scenes she presents her book. Sasa Handa, a former AV idol turned cult actress, plays the office girl that declines Kaito, in genuine exploitation fashion.

Despite the somewhat confusing narrative, “Colonel Panics” is a very impressive film, as Cho Jinseok manages to combine elaborately three different genres, through an artistry that derives from the technical aspect and the movie’s general aesthetics.