A Japanese bra manufacturing company located in Hong Kong wants to expand their markets and decide to create the “ultimate bra”. Accordingly, they are even breaking their tradition of only hiring female employees by recruiting two male designers for the project. 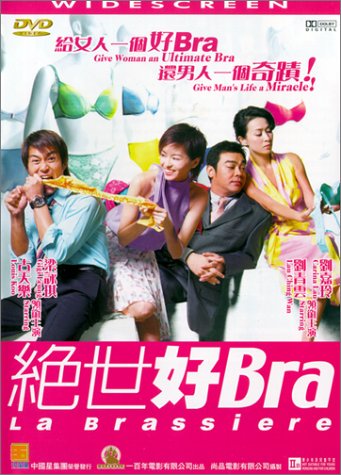 Enter Johnny (Lau Ching-wan), a designer of men’s briefs and Wayne (Louise Koo), the tanned playboy. The company’s head designer Lena (Gigi Leung) is not pleased to be working with the new male designers. However, they all answer to their boss, Samantha (Carina Lau), the executive of this Hong Kong branch. Nonetheless, the female stuff is excited to work with their new male recruits. In return Johnny and Wayne are more than happy flirting with them even though they only have three months to create the “ultimate bra”. As the deadline is creeping up fast, can they deliver the goods?

If Wong Jing were to direct “La Brassiere”, we would most likely get a sleazy, vulgar romantic comedy full of girls bouncing around in their bras. However, under this pair of directors, Patrick Leung and Chan Hing-ka, we have a version that’s both funny and charming. All the four leads have a good chemistry and the supporting characters are delightful.

Law Ching-wan shows us that he can easily handle comedy just as good as being in serious in more dramatic roles. Louis Koo is in his usual charming mode, both of them complement each other and their comedic talents shine throughout the movie. Their best moments are during a crash course in which they try on bras to see how it feels to be a woman. That sketch is hilarious to watch and you can see that they are having fun, even breaking up so often with laughter. Furthermore, there are other busts of funny moments through the movie, especially from Louis Koo.

Carina Lau is equally effective as the mature, supplicated career woman boss, the role suits her well and we even get to see her in a variety of bras. Gigi Leung is also charming as the head designer who likes things done her own way, but eventually she is swept off her feet by one of the designers. All the characters in this movie are given English names, all the office girls and models look sexy and gorgeous, but not bordering towards sleazy.

Since “La Brassiere” is comedy about the female undergarment, it’s shot mostly in primary colours, with plenty of reds and pastels. There’s hardly any dark scene, the overall look is light, breezy and full of sunshine, right down to the music used. Overall, this’s a wacky but happy movie, hilarious at times with good character development. Sure, the plot is simple, but you’ll have a good time watching it. Who knows, you might even learn some tricks on how to create the “ultimate bra”.