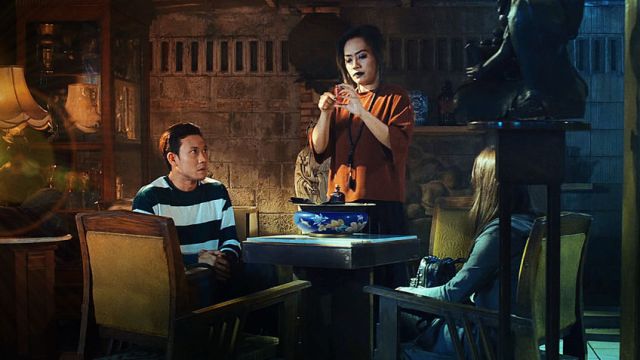 Among the numerous mainstream Hollywood genre adaptations, James Wan’s megahits “Insidious” and “The Conjuring” both serve as major tent poles for most modern fans to look at as being the prototypical films to copy or emulate. This certainly seems to be the case for this Indonesian effort helmed by rising director Rocky Soraya, who takes inspiration from both to turn out this new take on the genre, now available on Netflix.

Following the death of their parents, teenager Alia (Jessica Mila) is forced to take care of her younger sister Abel (Bianca Hello) and move back into their childhood home together. Taking her boyfriend Davin (Denny Sumargo) along for help, their efforts to settle in and move on are continuously interrupted by Abel’s claims that someone or something is living in the house with them. After visiting the psychic Wu Bindu (Citra Prima) to understand what’s going on, Alia soon comes to grips with the fact that her initial stories are true as she can now see the ghosts living among them and tries to help her save the spirits of the ghosts trapped in the house. As they attempt to do so, they find a far more sinister motive behind their appearance than originally suspected and must use all their supernatural knowledge and powers to put an end to the nightmare.

Overall, “The 3rd Eye” serves as quite an enjoyable supernatural effort. One of Soraya’s better qualities is the strong use of classic haunted house tropes for the supernatural scenes. This one takes plenty of inspiration from Hollywood films, by offering up numerous shock scenes with the ghosts walking behind someone, suddenly with a piercing musical sting afterward, flash-cut sequences of ghastly inhuman figures interacting with characters only to disappear suddenly, as well as a tendency to focus on intense and vicious attack scenes. Opening up with a vicious attack on the daughter is a great start, much like the later exorcism scenes or the possessed seeking revenge on the guilty party amongst them. On top of this, the film’s strong atmospheric touches provide several chilling encounters. The first encounter in the house offers an eerie ambiance, with it obviously not being lived in for a long time while the later scenes featuring them wandering through the darkened house during the thunderstorm provide strong atmospheric touches. There’s so much to like here with the bloody, deformed ghosts appearing to her in the hospital which set up the scenes of the ghost family attacking Alia in the house that night.

The other impressive aspect here is the strong supernatural overtones implied through Alia and Abel’s physical gifts. Much is made about the fact that they’re only able to see the ghosts around them due to the supernatural gift Abel has in having her third eye open. The visit to the witch-doctor who informs Alia and Abel about the gift and what it means serves as a fine turning point in the film, with the ghostly incidents switching focus onto Alia for more conventional and commercialized shock scenes. Since these scenes are based on the newfound experience Alia has with being able to see the spirits through the supernatural process of accepting the ability to see ghosts and spirits, the change in character and focus is quite impressive, leading into these supernatural sequences. Exploring not just supernatural-inflicted ghost scares but also moving into outright possession and exorcism through the on-screen actions, none of this feels out-of-place or tacked on, as the storyline manages to build a solid framework for these scenarios.

Still, the film does have a few issues. One of the problems is that Soraya focuses so heavily on cliched Hollywood jump-scares that so many of them miss their mark due to the overfamiliarity of the sequence. The attack by the ghost in the bedroom fails miserably since we’re expecting it based on the circumstances. The influences are also quite readily apparent in the finale, where the two venture into the spirit world to retrieve a character lost inside, and the colored lighting for the entire sequence comes off as a retread of other films and ideas. Other scenes are just as associated with familiar setups and scenarios, from the sudden ability to see the ghost girl in the hospital, to the crazed reactions to things no one else knows about, have very little impact because it’s all quite familiar and repeated here by virtue of the story forcing them into action. That’s also hurt by the instances of utterly woeful and abysmal CGI present for these scenes, as the ghosts crawling over trucks or objects with inhuman speed and ability look laughable rather than scary.

Despite “3rd Eye” focusing way too long on cliched shocks and setups from other films in this style, the fact that it’s competent and highly enjoyable as it is makes for a fun offering overall. If you’re mindful of the familiar elements and enjoy these sorts of chaotic Indonesian and Asian horror efforts then give this one a look, but viewers not really appreciative of this style should go with caution.