“A young girl seeks out imaginative ways to cope with the death of her twin brother” is how the film is described on IMDB. This is not a wrong way to summarize director Kamila Andini’s third work, “The Seen and Unseen”, but I guess most of the people who’ve watched the film will agree with me that this tagline simplifies the complex experiences the movie presents to us. 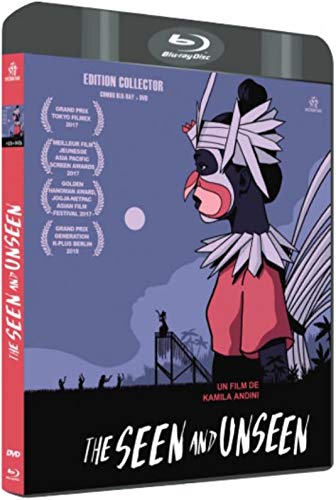 If the story happened in the U.S., we might see the main character, a girl named Tantri inventing her own peculiar routines or rituals to cope with the condition of her brother Tantra. Yet, this is not the case here. In director Andini’s world, all the main characters are deeply enmeshed in their culture, in this case, a Balinese way to life. Tantra will put on a shadow play, or play some traditional keyboard music for his sister. Tantri, perhaps in her imagination, will dress herself and Tantri as roosters and dance together as if they were two fighters in a cockfight. While only playing a minor role in the narrative, their mother will often sing folk songs to express her sorrow.

Although we can immediately categorize these songs and dances as “traditional”, the film is not interested in presenting a National Geographic-ish panorama of Javanese culture. Instead, we see these performances in a gorgeous but unsettling way. In an illuminating interview published on the website Seventh Row, Andini says that the film “is about capturing something from reality and seeing it from a different perspective, to make it something else.” This is particularly clear in two sequences. At the middle of the film, somehow Tantri is watching a cockfight on the side of the road. The camera stays on the ground-level and focuses intently on the struggle between the two creatures. It’s a painful scene to watch, but one cannot move one’s eyes away from the mesmerizing action. The scene has no narrative function. All we can do is to receive and try to compare all those exhilarating experiences.

Immediately after this scene, we see Tantri dress herself and her brother as two roosters and restage the cockfight scene in a hospital room (at this point Tantra is suffering from a brain tumor and spends most of the film in the hospital room. It’s rather hard to say if this scene “really” happens or is it only in Tantri’s imagination). The bloody fight is transformed into an exquisite dance between the boy and the girl. Instead of feeling the thrill of violence, we are dazzled by their agile movements, colorful costumes and beautiful body pants. “What does the dance mean?”, seems to be the wrong question to ask here. What Andini is asking us to do is to immerse ourselves into these two different ways to engage with the world. In the first scene, we are experiencing the world immediately, in the second one, we are witnessing the world through a particular worldview.

“The Seen and Unseen” makes us more alert about the cultural conventions. This is because Andini constructs the film with some surrealist strategies. The main thing is that the film moves swiftly between reality and dream. Sometimes, we cannot be quite sure the things we are watching are really happening or not. Moreover, in a gesture akin to Dali and Buñuel’s “Un Chien Andalou”, Andini creates a poetry of objects. We see things with similar shapes or textures appearing successively. An egg will rhyme with the moon in a later scene; children in the film will be replaced by monkeys on the beach. By creating these strange settings, the film unsettles us and forces us to not view these images through a conventional lens. Interestingly, the author of this strangely beautiful film explores her Indonesian identity through her own version of surrealism (one might see a parallel between Andini’s and Aimé Césair’s relationships to surrealism.)

With stunning cinematography and choreography, “The Seen and Unseen” invites us to a Balinese way to view life.