Based on the homonymous manga by Eiji Ohtsuka, “MPD Psycho” is a total clusterf*ck of a series, even for Miike, and one of the most interesting productions he was ever tasked to do.

Unweaving the thread of the story will present some spoilers and is actually the most difficult part of this review, but keep in mind that what I will mention here happens in just the first 35 minutes of the first of the six, hour-long episodes. 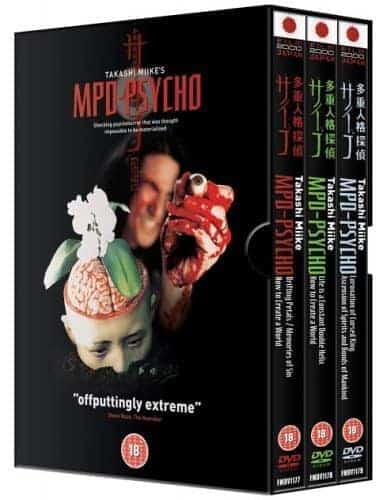 The story takes place in the final days of the Showa Era. Tooru Sasayama is the police chief of a little town who has been transferred there recently, for reasons that are soon revealed. He frequents a small cafe run by Kobayashi, a former profiler for the police, and his new wife, Chizuko. However, Kobayashi is not who he seems to be. He was previously married to another woman named Chizuko, who was killed by a serial killer whose victims were all pregnant, Nishizono. From the shock, Kobayashi suffered from multiple personality disorder, and he transformed into another persona, Kazuhiko Amamiya, and managed to kill Nishizono, before becoming Kobayashi again. Nishizono, however, branded a number of people with barcodes, and could actually transfer his personality to them, making them potential killers (if they have thoughts of murder already on them).

As the series starts, Sasayama has to face a new sadistic criminal, who turns his victims into human flowerpots, burying them in gardens. To solve the case, he asks from Kobayashi to help, but soon a woman psychiatrist that has some connection with the pregnant murders also gets involved, with Sasayama thinking she pushes Kobayashi to become Amamiya again. Soon, however, he realizes that Amamiya never actually left, and Kobayashi has been pretending all along, while the woman, Machi Isono, is revealed to run a private criminal profiling company and has hired Kobayashi.

In the meanwhile, the “flower killer” is revealed to be an architect, and Kobayashi’s new wife becomes one of his prospect victims, after a phone call that somehow hypnotizes her, leads her to him, and has a power from her transferred to him. Furthermore, Sasayama discovers through an underground video recording lab he frequents, footage suggesting Nishizono is still alive and has transferred his personality to another bar-coded individual.

I hope you are not confused, although I doubt it.

The rest of the series includes various serial crimes, including one involving stealing babies from pregnant women, school bullying and mass suicide, school gangs, and a rather strange case in a hospital. Eventually, it is revealed that a major company has something to do with what is happening, with the root of it all traced to a failed rockstar turned terrorist during the 60s, Lucy Monostone. Lastly, Sasayama finds an unlikely ally in the whole case, a rookie policeman who manufactures clay miniature models of the victims of all the murders, Tatsuya.

To tell you the truth, after I watched the first episode, I decided to read the manga first, in case it could shed more light to what is actually happening. Alas, the series does not share the same story with the manga, apart from some basic elements and the characters, with Eiji Ohtsuka, Gichi Ohtsuka and Yumi Sirakura’s script straying quite far away from the original, although not in style and overall concept.

Evidently, in 6 hours of an extremely complicated case that touches, additionally, both technology and the supernatural, there are times where the control becomes completely lost, although Miike, to his credit, always manages to put it back on track. The result is definitely captivating, although quite heavy (the series is definitely not one to be binge -watched), with the first part owing equally much to Miike’s direction, the case, the character creation and the acting.

Regarding the first aspect, Miike presents the story in all its complicated and grotesque glory, through a surrealistic approach that allows its aesthetics to bloom in full. The main instrument of this tactic is a number of sequences of recurring style. The theatricality of the police meetings, where Sasayama acts as the clown, Tatsuya is mocked for being an otaku (nerd in essence) and the commanders of the police force function as an audience, occasionally booing and occasionally cheering, is the first one, and the one that highlights Ren Osugi’s work as Sasayama. The second is a sequence with a completely black background, where Sasayama and Tatsuya confer about the cases, occasionally having imaginary snow falling on screen. The third is the animation of a girl that eventually plays a part in the story, and the last a number of outdoor scenes, where a kind of neon rain falls, creating a mysteriously surrealistic atmosphere. Lastly, in a deeply ironic approach, the series contains several visual distortions which, although they seem as censorship, actually cover non-explicit images and are there to make fun of the so annoying tactics of the Japanese law in that regard. Occasionally, however, they do cover really grotesque images.

Regarding the case, I think I have already said enough and the many plot twists do not allow me to dwell more. Regarding the characters, apart from the goofiness of the main police officers, we have the schizophrenic Kobayashi, the rather mysterious Machi, and a number of one-time characters (including the always cult Chiaki Kuriyama as a schoolgirl and an extremely tall, extremely violent, extremely long-tongued guy in the gangs episode) who occasionally steal the show. The concept of each character and the way their presence forwards the story (the recurring one as more secrets about them are revealed and the one-timers through their individual story) eventually connecting all of them together is one of the series’ best assets, as it manages to carry it for the whole of its 6 hours. The fact that the last episode is almost completely stripped of any goofiness also adds to this aspect, by presenting a different approach to whole series.

Of course, the character’s presentation benefits the most from the acting, with Ren Osugi being exceptional in a plethora of different styles, Satoshi Matsuda being quite convincing as the nerdy Tatsuya, and Naoki Hosaka as Kobayashi/Amamiya/Nishizono being great in all different parts. Tomoko Nakajima emits a very well suited mysteriousness that eventually finds a shocking way out, while the many guest stars portray their parts quite fittingly.

Lastly, this review would not be complete without mentioning the excellent music by Tsugutoshi Goto and Yumi Shirakura, whose rendition of a number of supposedly actual songs of the 60’s by Lucy Monostone is exceptional. Particularly the main theme, titled “Strange New World” will definitely stay on the mind of anyone who watches the series and definitely fits the delirious aesthetics of the title.

I have seen more than 60 of Takashi Miike’s films. I daresay that “MPD Psycho” is one of his best works, and definitely among the most memorable.