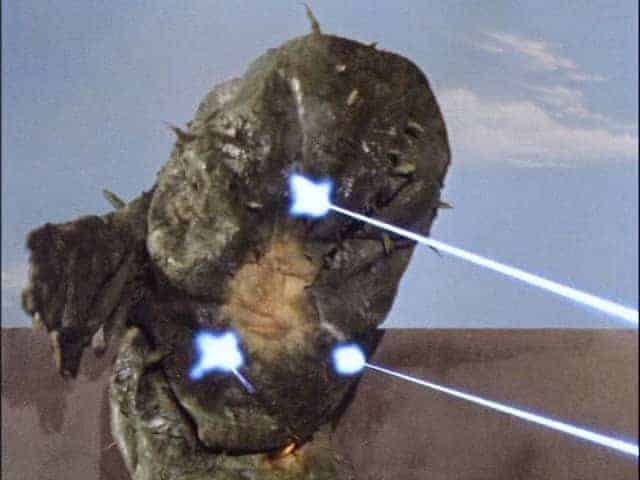 After a series of strange accidents, the Science Patrol finds the culprits to have been involved in a special research trip to a remote island that came in contact with a strange radioactive substance, which mutated a local flower into the guilty party and are forced to rely upon Ultraman to finish the job.

For the most part, the story here is far more impressive for a TV show than expected. The first half mixes together a nice murder mystery with the disappearance of the scientists coming together with the scientific inquiries being made, which is quite a novel concept for the series. The team needs to understand the strange readings they capture in regards to the strange substances at the scenes of the individuals that are later revealed to be featured participants of the fateful expedition. This is a nice callback to the earlier show in the legacy of the series which would have a similar setup and then later delve into being a monster feature as this one.

The latter half of the episode is the standard monster feature where it turns into the creature on the loose with plenty of fun to be had there. The creature manages to be a bit of a downgrade after the previously fun first-half, being a pretty standard tale of a mutated being on the loose that requires the Science Patrol to swing into action to stop it and once it becomes gigantic it’s now Ultraman’s responsibility to do so. This is all fun but it’s really not as interesting as the slightly more creative setup. The backstory detailing the creation of the monster and its connection to the trip told through flashback offer some merit to these scenes but it’s not nearly as impressive as the other section.

On the whole, we don’t have much in the way of special effects here, which is all the better because what we get here isn’t that impressive. That is mostly due to the utterly atrocious costume for Greenmons, which is rather disappointing. The basic design, a mushroom-topped, one-armed venus fly-trap plant that basically looks like a garbage bag, is covered in green slime as it’s baggy and completely inconsistent with its shape. There’s not much that looks cool or frightening, and it really only has one move in its fight which is to open the enormous flap around the top which consists of a mouth and spray an acid-like substance that incapacitates its victim.

While there’s not much to say about the creature, that’s not the case with the rest of the special effects. The fact that the first half here carries some ingenuity with the storyline also carries over into the ability of the special effects team to dive into the enjoyable attacks by the human-sized creature to start with. The opening attack is a fine horror atmosphere detailing the attack done in a shadow-attack against the wall of the tunnel. That’s continued in the second sequence where the green slime slides under the door and materializes into a full-on creature. With a later sequence showing the Science Patrol taking it on in a human-sized form that inspires numerous Super Sentai shows to come, there’s a lot more variety spread throughout here.

There’s very little about the acting that’s worth repeating. The majority of the focus here is on investigating the incidents so it’s not about getting to know the team at all. Ito gets a nice comic relief moment, but that’s about all we get since there’s not much room for it anything else.

There are two other factors worth mentioning here. The main storyline, not only with the fun concept of them investigating the mysterious substances but also of the various types of different visual tricks are able to be employed to help this one out even more. Again, the opening is shot as though to mimic a creature feature attack from that time-period, where the graphic nature of the attack is hidden by being created through a shadow attack on a wall. It’s insanely inventive in this type of show and looks even better with the impressive idea of doing the flashback in black-and-white with the flower being shown in color. This is a fun idea and realized nicely, making for some nice photography here.

Elsewhere, its main fight at the end is a bit of a disappointment. The fight between Ultraman and Greenmons is incredibly brief and doesn’t really have any type of traditional brawling which is what’s supposed to make these types of shows fun as it consists of a dropkick, some squaring off in a Mexican standoff before Greenmons throws its mist and Ultraman turns right around to blast it to pieces with the Specium Ray. This is quite an underwhelming effort devoid of the type of action we usually get and really seems to capture what a depressing entry Greenmons really is as a monster, since it’s fighting style is as good as its design is.

As this episode was quite intriguing up until the finale, it ends up being quite the fun if somewhat disappointing entry especially with the fine run of shows up until now. There’s still enough to like here like always but it’s not the typical work, which leaves this an overall watchable if flawed effort.