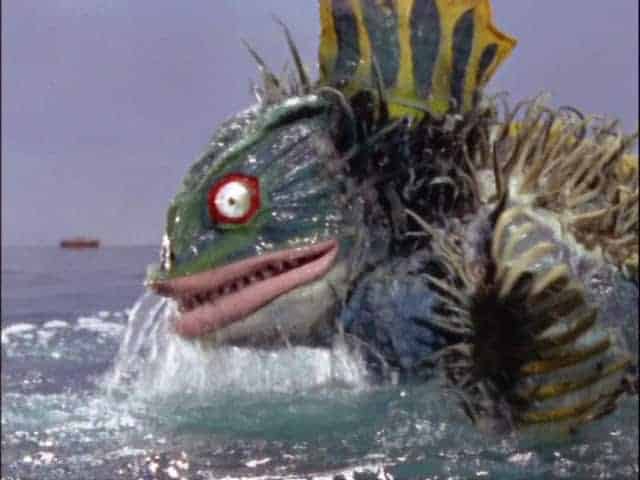 While out with friends, Hosino spots a pair of smugglers moving into the local warehouses looking for stolen diamonds, but when the cacao beans the diamonds are smuggled in attract the attention of Gesura, a giant lizard from the Amazon also stolen away in the trip, they rely on Ultraman to stop the creature.

While on the surface it has a simple story, this is a bit more intricate than expected. We get a series of mentions about something happening in the area, from the giant shark attack and the series of ship disasters that signal the creature appearing in the area with the occasional connection found to the cacao beans featured there. Since there’s also the pair of smugglers in the area looking for a cache of diamonds brought over with the cacao bean shipment, they get involved with the kids looking for the monster and soon all three storylines converge together, requiring the assistance of Ultraman to stop the creature and save the kids.

This simple setup comes off rather nicely here due to the influx of the smuggler storyline. This does draw up eerie comparisons several years later when a similar situation occurs of kids meeting up with smugglers, and this one does quite a fun job setting up their interaction by having their stolen targets inside the cacao beans that have gotten the children’s interest. This doesn’t really explain the creatures’ size increase (a singular line is given about the creature growing due to ingesting the specific beans it feeds on yet not why that grows the creature to a kaiju size) but it provides enough of a starting point to keep the kids involved as well as getting the creature on-screen.

The special effects are perfectly adequate if not outright outstanding. The main monster Gesura, a giant brightly-colored amphibious fish, has a nice impression with the large protruding fish-face adorned with plenty of green, blue and yellow splotches of color, giant pink fish lips and a bright tentacle piece on the back of its head. The rest of the body looks incredibly fish-like with the mix of fish-scales along a lizard-like body that looks like an impressive kaiju TV-show monster. This is exactly the kind of place where this design works as the floppy stub-like tail, dangling fish scales and grotesquely overlarge head would wear out its welcome in a feature-length adaptation, so it works perfectly in this setup.

Elsewhere, we don’t get much innovation but just impressive work whenever it appears. The composite shots are somewhat impressive, most notably a stellar sequence of Gesura appearing over the top of a warehouse while the Science Patrol is fleeing the area in the foreground. Other times, including a rampage in the warehouse district, while the Science Patrol is evacuating the rest of the bay or the shot of Ultraman saving a police-car featuring the kids and the Science Patrol which Gesura is about to step on, are spot-on and look extremely effective. A few scattered cut-shots to the miniature set from the live-action setups look a little obvious based on the hard-jump away from the two locales, but otherwise, the camera work is quite nice.

Still, the standout special effects featured here are the miniature models and buildings. The ships that Gesura attacks and ends up sinking look impressive, like actual ships to be found in real life with the masts and wooden hulls which stay intact during the attacks, which is what a real ship would be like. The warehouse district, even more, is an unequivocal highlight, taking the massive buildings in scale to a row of dynamic buildings that look wholly realistic, crumble effectively and are photographed from incredible angles that highlight the model-work full-on. Providing the setting for the final fight between Gesura and Ultraman as the two skirmish in the rubble of the destroyed warehouse, this is a fantastic aspect of the episode.

Without much in the way of character development here, there’s not much to say in regards to the acting. The addition of bringing Hoshino into a more prominent role by letting him be more of a kid his own age, hanging out with the friends at the pier and letting him use his skills acquired from being around the Science Patrol for aide in escaping the bandits, offers this one some stellar kid-friendly scenes for him. The only real questionable action throughout the film is the idea that the Science Patrol, a corporation specifically set up to deal with giant monsters threatening the world and have done so on at least five previous occasions to date, would scoff off a report of a possible monster from a reliable character they have personally interacted with on several of those encounters. To make the entire affair about the smuggler rather than the possible monster sighting, they should be in charge of preventing should it prove true, and to overlook that, seems dangerous and not quite responsible.

About the only extra element to add here is the rather enjoyable element added to the final fight. Not only is Ultraman not shown using any special powers of any kind since the Specium Ray is never used to dole out the knock-out blow, but the fact that Gesura itself also never offers up any kind of special attack, with the fight consisting mostly of them wrestling and brawling with a creative, unique twist to finally offer the killing strike, is pretty fun. This is a big, bright fight and has some brutality to it by the way they engage in such a physical brawl and is one of the best for that reason.

Despite not being stellar in any area, the fact that it remains as fun and enjoyable with what’s on display end up giving this a solid feeling overall. It’s definitely not the best episode but it’s got enough to like which makes this a rather worthwhile if nonessential episode.