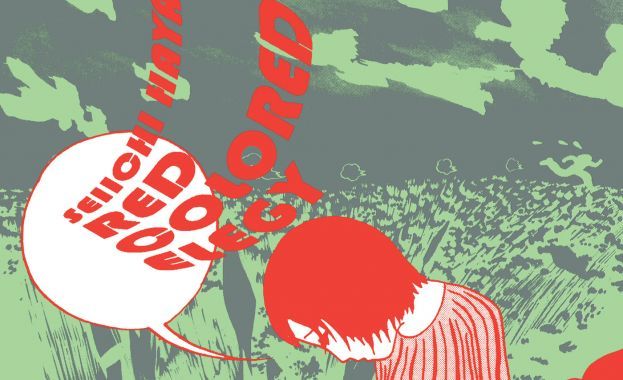 “Red Colored Elegy” chronicles the struggles of two young artists in Ichihiro and Sachiko. Finding themselves disconnected and rejected from the commercial art industry, they struggle to find meaningful employment, which sees their relationship in constant flux. 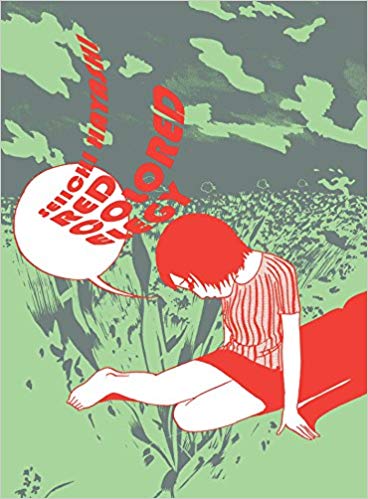 Seiichi Hayashi’s “Red Colored Elegy” acts as a reflection on Japanese disenfranchisement within a culture that offered, but failed to deliver in growth and development. This sentiment has been more heavily explored within the Japanese new wave film, at least in terms of availability of media content here in the west. As a ‘cinephile’, with a particular interest in 60’s and 70’s Japanese film, this original work offers an intriguing look into the alternative manga scene of the time.

The story of Ichihiro and Sachiko is rather fragmented, seeming to highlight moments of despair, and the polarizing effect that it has on their relationship, sometimes drawing them closer, sometimes alienating them from each other. As a result, the manga gives some depressing vignettes of two people who seem fragmented from the world around them and themselves. With a larger focus on the male character Ichihiro, the manga tackles such subject as alcoholism, depression, anxiety, insecurity and suicidal ideation. Overall, the manga really offers an intimate look at a couple struggling with a sense of identity and desperately searching for a place within society they can pride themselves in. It also eschews some more modern manga tropes in not allowing the protagonist to find peace of mind, and closes with a single page panel that is tragically enthralling.

The visual style of Hayashi is rather simplistic, giving a paradoxical impression to popular manga of the time. Thankfully, it is punctuated with a few larger pieces, reminiscent of a ‘ukiyo-e’ wood block prints that add some much needed visual flair. The minimal approach to imagery does force a a larger focus into the story’s narrative, and pushes towards reader interpretation or familiarity to fill in the narrative gaps. To this degree, “Red Covered Elegy” is exceptional in its execution and offers a wholly unique approach in its storytelling, that can only really be captured through the medium of manga. However, the artistic style won’t appeal to everyone, and the success of the narrative seems to rest on the reader’s ability to draw empathy towards the characters. Unfortunately, the presentation in both visuals and narrative is bound to limit the potential audience.

Given the manga’s rather simplistic approach, I originally found myself a bit deterred to give “Red Colored Elegy” much attention. However, the somewhat repetitious nature of the content becomes oddly hypnotic, and acts to deepen the severity of its subjects struggles, making it a deceptively deep portrait of disenfranchised youth. Framing the manga within a time period where I had some vested interest in cinema, definitely gave the work additional intrigue, as thematically it coincides with common sentiments within Japanese new wave film. The personal nature of Seiichi Hayashi’s “Red Colored Elegy” ensures that within the right audience, it is bound to leave a rather profound impact, with myself feeling lucky to fall into this category. However, the unorthodox approach in visuals and narrative will, understandably, leave a large portion of readers indifferent, or even frustrated with the end product. “Red Colored Elegy” will be a masterpiece to the right group, and any fan of manga or Japanese media of the era would do themselves a service to give the manga a chance to see if it resonates with them.