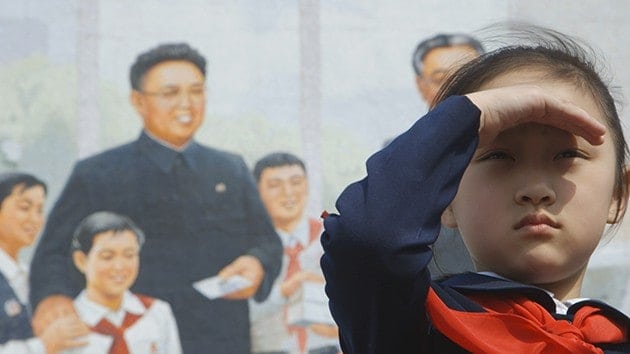 The fact that a Russian director would shoot a documentary about North Korea was very intriguing by itself, to start with, but the way the film ended up being shot gave it a hypostasis that reaches the borders of mythical. Let us take things from the beginning though.

After years of negotiation, the Russian director Vitaly Mansky was invited by the North Korean government to make a film about one girl and her family in the year she prepares to join the Children’s Union, on the ‘Day of the Shining Star’ (Kim Jong-Il’s birthday). North Korea permitted only Mansky, cinematographer Alexandra Ivanova, and a sound assistant to visit the country. Unknown to North Korean authorities, Mansky hired a Russian translator who was fluent in Korean, but had no experience in sound recording, to act as the sound assistant. Furthermore, and despite the efforts of the government’s handlers to arrange and direct everything, Mansky managed to continue filming, even after the N. Koreans shouted, “Cut”.

North Korean authorities objected to the film’s screening after discovering that the film crew had smuggled unapproved footage. The government lodged a complaint with the Russian Foreign Ministry, which was a production partner, seeking a ban on screenings of the film. Despite objection by some nationalist Russian politicians who support North Korea, the request was rejected by Russia and the film has been screened at film festivals in the country and later, all over the world.

The first word that comes to mind about “Under The Sun” is “shocking”, although, at times, even that appears modest in describing what I was watching on screen.

The first scene takes place in a classroom, where the “protagonist”, Zin-mi, along other girls, learn that generalissimo Kim II-sung was a man of mythical proportions, who attacked the Japanese aggressors and the Korean landowners who wanted to sell off the land of their ancestors, not allowing them to continue with their despicable plans. At the same time, the teacher makes a point of encouraging the children to love Kim, and to hate the aforementioned, and also the Americans and any kind of imperialist in the world. In similar fashion, the documentary presents a series of episodes, which, being directed to the last detail by the authorities, are made to glorify the three generations of Kims who rule the country and the Juche dogma, a nationalist version of Marxism-Leninism that is the official state ideology of North Korea.

From the factory, to the festivities of the ‘Day of the Shining Star’ and the children’s joining the Children’s Union, to the national celebrations in the city squares, until the everyday life of Zin-mi, everything is directed and untrue to the last detail, in a theatre of the absurd where every citizen plays his predetermined role, without even the smallest sign of resistance.

These directed scenes look impressive at times, as they present a country joined under the patriarchic authority of the Kims. However, when all the cameras but one turn off, the bitter truth comes to the fore and the smiles disappear completely, producing a melancholic feeling that Mansky heightened with the use of some very fitting music tracks. This tactic finds its apogee in the last scene of the film.  Furthermore, some on screen texts that appear before the changes in the settings reveal the truth about the lies of the government officials that accompany the Russians, as they also feature a rather pointy sense of irony regarding their tactics.

The size of the propaganda revealed is so significant that is difficult for anyone to believe what he is witnessing on screen, while the way the children are educated and dealt with, in general, is truly appalling.

I would not like to write anything else, since any comment regarding cinematography and editing seems unnecessary in front of the context. Just watch one of the best documentaries of the latest years.