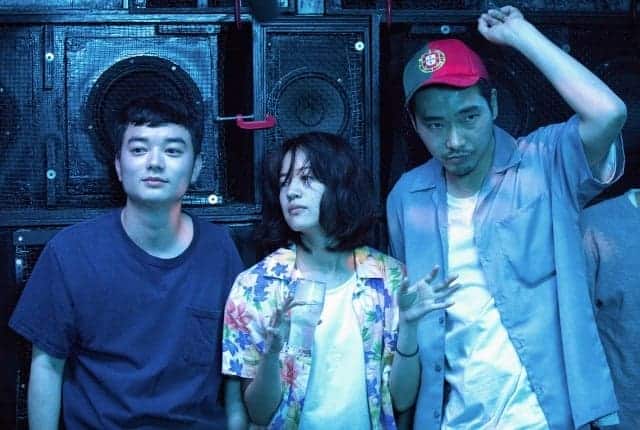 Although its characters get drunk all the time, “And Your Bird Can Sing” is as sober as it gets. Captured in the triviality of everyday life in northern Japan, Sho Miyake presents a lackluster love drama based on a novel by Yasushi Sato.

A nameless book dealer played by Tasuku Emoto (“Air Doll” 2009) falls in love with his coworker, Sachiko. His roommate, Shizuo, also has interest in her. Normally, a perfect base for conflict. But somehow Miyake misses to build up the tension. I don’t blame the actors. Shota Sometani (“Parasyte” 2014) as Shizuo and Shizuka Ishibashi (“Nights Tightrope” 2016) as Sachiko are doing their best. Natural acting, becoming one with the camera and creating harmony on screen. Unfortunately, this does not help the pace of the film, who fails to arouse the interest of the viewer.

“And Your Bird Can Sing” is too long. Endless scenes without any editing, and without any contribution to the character or plot, vanish into insignificance. The film equals a documentary contemplation. Having seen a lot of Japanese films, normally this contemplation is part of the deal. It creates atmosphere, leaves space to get your own imagination going, and challenges the way we use to watch movies in general. Very often you feel somewhat changed afterward. But here is nothing to take along. As the characters move on, themselves and the film create a void that is ultimately filled with a feeling of surrender.

By relocating the setting to Hakodate (initially, it was Tokyo in the novel) “And Your Bird Can Sing” adds up to previous movies like “Sketches of Kaitan City (2010), “The Light Shines Only There” (2014) and “Over the Fence” (2016), who all take place in Yasushi Sato’s hometown. The very basic, everyday story, leads us through the nightlife of this town. Shot in a naturalistic way, the camera work and the usage of color are remarkable.

Cameraman Shinomiya Hideyoshi is a fly on the wall, leaving the natural habitat to its actors, and is supported by a broad color palette, ranging from blue to yellow filters. On this level, the crew is really trying to make an effort in representing the mood of the locations. In combination with the protagonists, this sometimes succeeds. But still, Miyake could have made a really fitting short film out of it. Cutting half of the scenes and focussing more on the core of the characters, would have benefited the end product.

In comparison with its predecessors, “And Your Bird Can Sing” does not get across the liveliness and dynamics that you can find in “The Light Shines Only There”. It rejects common J-Drama stereotypes like overacting, unrealistic love scenes and philosophical waffle, which is refreshing. On top of that, we see some of the best actors that Japan has to offer right now. If you are interested in following their work and want to complete your Hakodate cinema experience, then this feature is fitting for you.