“Spicy food can be a form of pain to numb another pain”
Director, producer, writer and wonder woman Heiward Mak who AMP had the pleasure to meet and interview at a previous edition of Five Flavours Film Festival, is back in excellent form with her family drama “Fagara”, named after the delicious and very hot Sichuan peppercorns, renowned for being so strong to numb your mouth (all true and tested!) Based on the popular 2011 novel “Spicy Love” by Hong Kong writer Amy Cheung Siu-han, “Fagara” is co-produced by Ann Hui.

The sudden dead of a father is a painful and intense shock even if, like for Hong Kong travel agent Acacia (Sammi Cheng), the family bond has been neglected for quite some time. Even more shocking for Acacia is learning that she has two half-sisters that the father Ha Leung (Kenny Bee, seen in many flashbacks) had with two women in other countries. The flamboyant Taoist funeral is the place and time of their first encounter, marked by a rather amusing gag at the discovery that the father wasn’t Taoist at all but Buddhist, to Acacia’s surprise. Tomboy professional pool player Branch (Megan Lai) is the first to arrive at the funeral from Taiwan, followed by extravagant fashion vlogger Cherry (Li Xiaofeng) from Chongqing, China. The two knew each other already and Acacia feels totally excluded by their strange family alliance, highlighting how little she knew of her father’s life.

Over the following days the three women spend time together and start to know each other and learn more about their individual families – Branch left her mother’s middle class new family and struggle with her mother-daughter dialogue and Cherry lives with her grandmother who wants to see her married – and together they recollect and put together like a jigsaw puzzle the pieces of the patchy Leung’s life through their sparse interaction with him and his relationship with theirs mothers. Catalyst of the process is the cosy Sichuan hot pot restaurant that their father had run for years in the laid-back and quiet Tai Hang neighbourhood of Hong Kong. The restaurant is beloved by the locals and the kitchen staffs are all people that the kind-hearted Leung had helped in various ways, but the diner has only a year left on the lease, and Acacia with the help of her new all-sister-new-family decides to keep her dad’s legacy running.

Classic family drama “Fagara” is a very accomplished piece of work in which the director explores familial dynamics with an all-feminine maturity and intuition. A film that could have easily plunged into over-sentimentalism or a stereotypical female rivalry, “Fagara” stays miles away from that and shows instead a beautiful and very possible “sisterhood”. A soft touch, a restrained tone and yet an engaging storytelling are some of the best qualities of this drama. After the initial shock of the death and revelation (no spoiler here, it all happens in the first few minutes) the story covers the following year up to the end-of-lease deadline and it is narrated in an almost episodic way, through sketches and vignettes, jumping from Cherry’s life in Chongqing and her sweet relationship with the grandmother, to Branch’s troubled life in Taiwan balancing career and family and again back to Acacia’s process of mourning and re-discovering of her father.

Acacia is also torn between a cold but friendly relationship with her partner Andy Lau and a new interesting doctor Richie Jen (some people gets all the luck!), and we learn it through little snippets of conversation. There is here a sweet and comedic symbolization of gaining emotional autonomy, as all the dialogues with Andy Lau happens in a car; it’s always him driving her somewhere, as Acacia cannot drive. On the other hand, Richie Jan encourages her to learn to drive, even offering himself as a Guinea-pig-passenger and by the end of the film Acacia gets her driving licence and the autonomy of travelling alone.

The performances of the three leads are solid and engaging. Sammi Cheng as Acacia is a pleasure to watch (as always with Cheng); she is the character who develops the most as the film follows closely her path to acceptance and forgiveness and her effort with the restaurant, but it is Branch that is bound to have more impact for her interesting personality, independent and fragile at the same time, rebel but longing for the broken maternal bond. Cherry has less screen time but with her interesting mix of modernity and a sincere care for her roots, she is, no doubt, the most grounded of all.

“Fagara” doesn’t seem, at any point, to be making a political statement but in these days it will not go unnoticed that the three sisters are scattered in three different components of “Greater China”. However, the approach here is soft and more humanistic, the focus is on the uniqueness of the individuals and on the idea that the people are innately good, with an emphasis on the young generations breaking the mould and innovating; Cherry rejects the old fashion idea of arranged marriage – still very popular in China – if not marriage at all, and the gentle suggestion of Branch being lesbian could be a hint to Taiwan’s recent progressist turn, legalising same-sex marriages.

Despite being a bit ahead on time “Fagara” could be a good Lunar New Year Film, with its themes of family reunion, reconciliation with the past, shared food, a gentle touch of comedy and, not last, a great line-up of beloved actors. It is one of those films that makes you want to see a sequel! 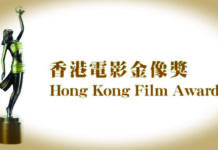 The 39th Hong Kong Film Awards Nominees List is Out. Dates still unknown due to the health scare.