What do you do if you’ve just made “The Vengeance Trilogy”, three very violent, very dark, very iconic films based on the theme of revenge? If you’re Park Chan-wook, you follow them up with a romantic comedy, of course! 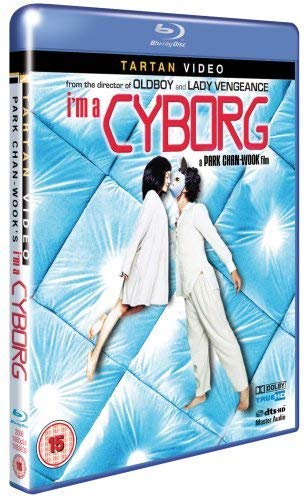 Cha Young-goon is a beautiful young schizophrenic girl who begins to think she is a cyborg and is committed to a mental asylum, shortly after her grandmother is also sent to an institution for believing she is a mouse herself. Here, she meets another schizophrenic Park Il-sun, a young man who believes he has the ability to steal other people’s traits, habits, behaviours, among other things. He takes an immediate shine to this mysterious new girl who talks to machines and doesn’t eat because a cyborg doesn’t need food to sustain herself and just licks batteries to charge herself up. Young-goon wants Il-Sun to take away her Sympathy trait, which she believes is one of a Cyborg’s sins, so that she can fulfill her mission of killing all the “white ‘uns”, the doctors and nurses and orderlies, who took away her grandmother from her.

Although his films previously featured some situational comedy expressed mainly through small dialogue and the actors’ mannerisms- some even featured romantic bylines that were ultimately tragic- this is Park Chan-wook’s first, and so far only, out-and-out romantic comedy. That is not to say that it does not have his trademark violence at all. There are scenes of fantasy where Young-goon imagines taking out the “white ‘uns” that can only be described as bloody carnage. But these scenes also have a comedic element to them. In fact, the fantasy sequences are some of the funniest and best scenes of the film.

Deep within the comedy, there are far sombre statements to be made and messages to be received. The way people treat their near and dear ones who have mental disabilities is shown brilliantly and possibly very accurately; how for the onlooker it is a very serious issue, but for those suffering with it, it is just something they have and is just OK. Hope is a very strong, persistent theme throughout the film too.

The performances across the board are brilliant. The beautiful Im Soo-jung is practically unrecognisable in a very de-glam role but her emotions speak volumes. Korean Wave superstar Rain (aka Jung Ji-hoon) shines in his debut film role, bringing a certain charisma and likability to Il-sun. All the supporting characters, such as an ever-polite man who can’t stop apologising to people and can only walk backwards, a woman with an eating disorder, a woman who weaves up lies to replace her lost memories, are all richly drawn out and ably performed. Special mention goes out to the set design in the film. The hospital and its surrounding grounds are beautifully realised, lensed to perfection by Park Chan-wook regular Chung Chung-hoon, who has worked with the director on every film since “Oldboy”. The jazzy and upbeat background score is just right for the mood of the film.

It is to Park Chan-wook’s credit that the film, which is usually considered the weaker work in his oeuvre, still ranks among the finest romantic films in a film industry awash with some absolute masterpieces of the genre. Park has stated that after making the DMZ-set “JSA” and the very violent Vengeance Trilogy, he wanted to make a film that his little daughter can watch. “I’m a Cyborg, But That’s OK” almost feels like a non-traditional fairytale at places with weird, bonkers but wonderful characters. Go on, recharge your batteries. Be wacky. Sometimes, that’s OK.