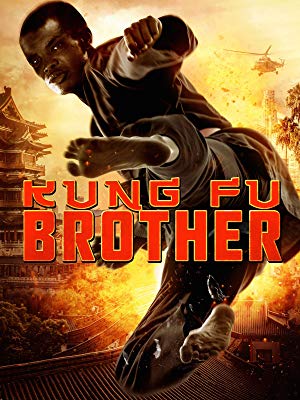 Kung Fu Brother is a 2014 Martial Arts Comedy, Directed, Produced, Written and Starring Marcus Aurelius. Marcus plays Jack, a man who is attempting to track down a killer, hell bent on retrieving the “Sacred Kuji Denjo Scrolls“. The scrolls hold thousands of years of secrets and documents, said to have been made before the birth of Christ, and the blue print of life. The scrolls also have magic powers which include the ability to heal, change weather and in the wrong hands, can be deadly.

Nick (James Huang) is a local policeman who finds his father dead on the job. When Jack (Marcus Aurelius) delivers information about the killer’s whereabouts, Nick and Jack head to Thailand where they are greeted by a female reporter who just wants a big story for her career and also Nathan (Who appears a little earlier) played by martial Artist Ron Hall.

This is where the movie really starts to pick up the pace with a big action scene which includes Ron Hall facing off against a few attackers whilst the reporter has a gun to her head driving high speed in a taxi chase. I have to say I enjoyed this action sequence and have to give credit to the actors and stuntmen involved.

There is one scene where we get to see the movie’s villain cutting up body parts with a severed head next to him. This scene alone tells the audience the mind set of this character, to get the “Sacred Kuji Denho Scrolls“, he will kill anyone who get’s in his way. Another scene I enjoyed with this character was his training sequence in front of a big red symbol with fire flames surrounding, which then went into the finale with the evil villain facing off against Nathan (Ron Hall).

During this fight sequence, we get to see some nice hand to hand combat and sword play. Nathan is trying everything to win but fails and when it looks like Nathan will be killed, Nick and Jack show up and shoot to kill. They realise very quickly that bullets have no effect of him and only a scared dagger can finish the job. I enjoyed the finale and have to give credit to the camera crew who picked up some great angles during the fights.

Other Highlights From Kung Fu Brother

*Ron Hall vs guys in a street fight

Kung Fu Brother was chosen to premier at the “Action On Film, International Film Festival” and gained three nominations for, (Highlighted below are the catagories which it won).

*Best Fight scene in a movie

*Action Film of the year

Overall, Kung Fu Brother is a fun watch. I do have to admit that the movie gets better as it goes along which is fine for an independent movie. I did enjoy the action and fight sequences that were delivered by Ron Hall, Charles Anthony Boatner and Robert Waldron. I also have to give credit to the special effects team, Harit Taechatthummarak Pong and Rangsan Rangsimaporn (Rangsan).

So if you want a movie which doesn’t take it self seriously, has some fun along the way and kicks some butt at the same time, then watch Kung Fu Brother now on Amazon Prime, Youtube (Payment to watch) and other sites.