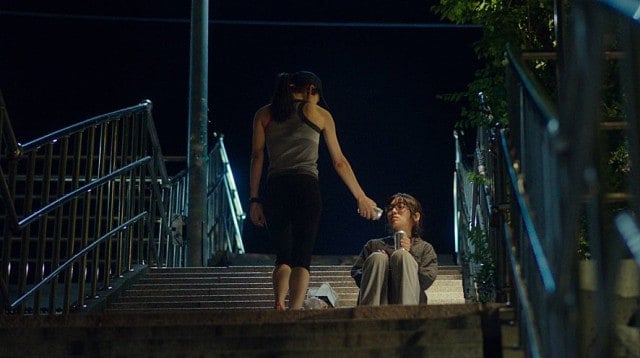 Following two deep years of strong Korean efforts, the country seems to have a number of tricks up its sleeve to cement itself as one of the more prominent movie-making countries in the world. First-time writer/director Han Ga-ram is up-to-task with her impressive debut effort, now available to stream on the US-based streaming service TubiTV, by Echelon Studios

Desperate to get her life in focus, Ja-yeong (Moon Choi) grows increasingly frustrated with her inability to pass the civil servant exams. While struggling to find a place in life, she gets a job at a friends’ accounting firm to pay the bills, but finds herself completely disconnected from the rest of her younger, more vibrant coworkers. While out one night, she spots Hyeon-joo (Ahn Ji-hye) running through the streets and tries to catch up to her but can’t as their different skill sets keep them apart. Determined to meet up with her, she decides to take up running as well and eventually starts to fall in with her and her running friends, which gradually starts to improve everything else around her. After a tragic accident befalls that group, Ja-yeong is forced to look at herself in a way she never had before, to try to get ahead in life.

Overall, there was quite a lot to like with “Our Body”. The most impactful aspect on display is the underlying message about the care an individual should have for their own body. Ja-jyeong starts off with a disinterested attitude about everything in her life, from her dissatisfaction with her studies, her go-nowhere relationship with her boyfriend and a generally lethargic attitude about everything else; the need for change is evident. Although it would appear that the change into a well-paying job would be the answer, Ja-yeong doesn’t start to change her life for the better until she devotes herself to bettering her physical status. As this is done by tricking herself, thinking she’s doing this for herself but rather so that she can chase after Hyeon-joo, this is where her life begins to turn around for the better.

That director Ga-ram was smart enough to make this journey relatable and not cinematic, to the film’s benefit. Ja-yeong goes through the steps in this gradually and not in an automatic state to where she would be an Olympic class athlete doing this for a week. That she struggles with the rigorous exercise, failing to keep up with others in better shape and experience who has been doing it for far longer, helps to make her far more humanistic than taking a more cinematic route. The connection between her improved performance while running and the increased quality with the rest of her life as she does more with Hyun -joo and her friends, is a great touch added here to further help the theme of physical self-improvement.

Despite all the good this develops, “Our Body” stumbles slightly in the final act. While it’s commendable that a significant shake-up is done to try to change Ja-yeong’s life, rather than take her life-lessons to heart, she backslides. When we see Ja-yeong at work, she goes about fumbling with her duties and has to sleep with the interviewer as a short-cut to make up for the way she behaves. That takes the character back to the very beginning when we first met her, and that this is done with her slowing down the running program is no mistake. A curious decision to have her get the energy to start back up running again only after Ja-yeong goes about pleasuring herself in Hyeon-joo’s apartment which is quite strange with no build-up over the true feelings between each other. These issues are what hold the film back.

On the whole, “Our Body” has a lot of positive elements with the relationship between two enjoyable characters and a nice message about improving yourself, wrapped together even though it somewhat stumbles in the end. The film will certainly appeal to fans of light, quirky K-dramas or have an interest in this genre, while those that don’t enjoy this style won’t find this that interesting.

“Meili” the directorial debut of Zhou Zhou, has been acquired by Echelon Studios for North America rights.