Synopsis:
Bouncing with nail-biting suspense and ingenious humor, young Chinese filmmaker Li Yuhe’s feature debut portrays a puzzling crime happened in a rural small town, where greed, lust and wit battle it out in one night. It all starts from a sexually impotent motel owner hiring a pro to murder his cheating wife. Everything goes exactly as planned, until two blind daters, a robber, a policeman and a strange dead body unexpectedly arrive 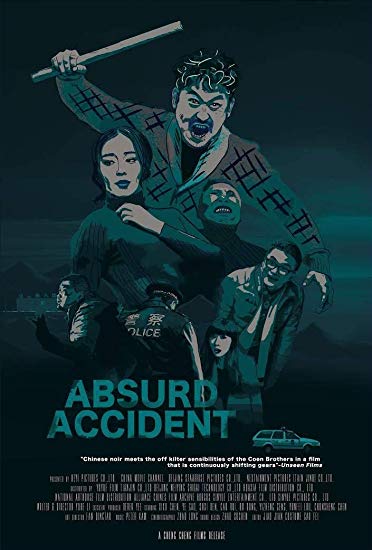 “a modern moral tale of the consequences of greed, wealth and a distorted masculine ideal on an unprepared rural community and is delivered with a light touch, a fast pace and a touch of naivety. It makes it an exciting wait for his next work.” (Asian Movie Pulse, you can find the full review here.)

“…I’m not from China, and I don’t know much about Chinese culture...However, the film totally works as a zany noir that can be enjoyed without needing much cultural context. I had a really good time with it, and I can’t imagine why anyone else wouldn’t….Writer/director, Li Yuhe, emerges as a promising and distinctive voice behind the camera.” (Cinema Sanctum)

“In the tradition of Chinese writers like Lu Xun, Li offers a hilarious – but mercilessly scathing – depiction of modern-day China. Forget what you’ve heard about it being the “next superpower,” the China we see in Absurd Accident is a country that’s characterized by shameless venality, rampant materialism, and gaping inequalities between the city and countryside…this film is a clear sign that Li will be “one to watch” in the years to come.” (Film Threat)

Film Review: Send Me to the Clouds (2019) by Teng Congcong