Natsume Soseki (1867 – 1919) was the preeminent Father of Modern Japanese Literature (said to have begun after the Meiji Restoration in 1868). Born as Natsume Kin’nosuke, he was a precocious child and grew up to be extremely smart and outstanding. He studied at Tokyo Imperial University (present-day University of Tokyo) and was sent on a government scholarship to Britain where he learnt English Literature and interacted with Western culture. The effects of such close contact with a world so foreign to him proved debilitating. 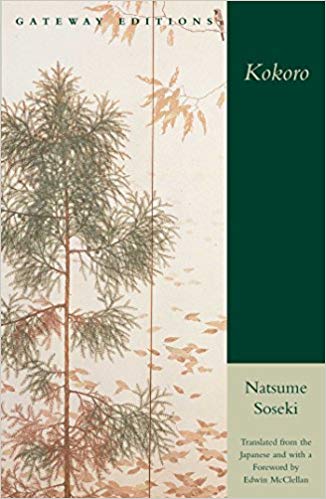 During his stay in London, Soseki was mentally disturbed and receded into himself. However, such mental disturbances did not plague him intermittently or temporarily. In fact, Soseki battled mental illnesses such as depression and suffered from physical illnesses like ulcers for as long as he lived. According to academic Jay Rubin, it would appear as if “The shadow of death hangs heavy over…Soseki’s career.” As such, before his death on 9 December 1916, Soseki was heavily preoccupied with mortality and the fragility of the human body. In addition, his interaction with the Western world had already enlightened him on the travails of Individualism and this would bear great significance in the work he produced. Published in 1914, two years before his death, “Kokoro” naturally encompassed several of these thematic concerns and is undeniably one of, if not, the best of Soseki’s works.

“Kokoro” follows an unnamed protagonist, referred to only as “I” in the pattern of traditional “I” novel – watakushi shosetsu- and his relationship with an individual named Sensei. The story is split into three main parts, namely – Sensei and I, My Parents and I and Sensei and His Testament. As their names suggest, these individual parts deal specifically with the characters with the last being formed out a letter sensei wrote to “I”. The protagonist is a young university student who is indubitably naive and hence, was attracted by what seemed like a hint of wisdom in the figure of sensei. As a result, he tags onto sensei, eager to “in all sincerity, learn about life”. Along the way, Soseki introduces a few characters, namely sensei’s wife, Shizu and in the flashback sequence, Shizu’s mother, his uncle as well as his friend, K. As for the main protagonist, his family forms the bulk of the second part.

“Kokoro” is a moving tale of the plight of the modern men and carries a more thematic rather than narrative tone. Soseki achieves this through a simplistic context, with a scarcity of characters, a lack of majestic settings or dialogues. The result is a simple and brief picture of how men tackle modernity, loneliness and love, all of which are extremely humane concerns. At times, this is brought out through such overt confessions, “I am a lonely man…[and] also a melancholy man,” as seen in the case of sensei opening up. Yet, even as we understand sensei’s melancholic disposition, we still feel as though he strays away from us unceasingly. Likewise, the young protagonist, who is only in University when he first met sensei, cannot claim to know sensei any better, therefore, it would seem as though their hearts are forever barred from each other. This is pervasive in the novel, as characters are often reticent in expressing themselves, which can be attributed to a form of restrictive social code of conduct, emphasising on the economy of speech and behaviour.

This would only change subtly and slowly as the Meiji era approaches its end. It is only in the last part that sensei exposes his bare heart, albeit in the most shocking fashion ever. By juxtaposing both sensei and the young protagonist, Soseki makes a concerted effort to compare the clash of tradition and modernity. This agency of comparison is also given to the characters as “I” reflects upon sensei’s reserved manner as a “timidity born of the conventions of a generation ago.” Being a part of the alleged trilogy including “And Then” and “The Gate”, “Kokoro” is Soseki’s masterful sleight-of-hand at painting the poignant tale of human suffering. The end result is nothing but memorable and relatable, transcending both time and culture.