Growing up in a small village, a group of students is haunted by the prophecy of a monster that is set to eat up their town. A withdrawn classmate of theirs is the one pushing the story, and the students soon begin to fear her as much as her warnings. This leads them to push her down a well, causing her to go into a coma. Now adults, their past tragedies are bringing the students together again, and manifesting their deepest fears and insecurities. 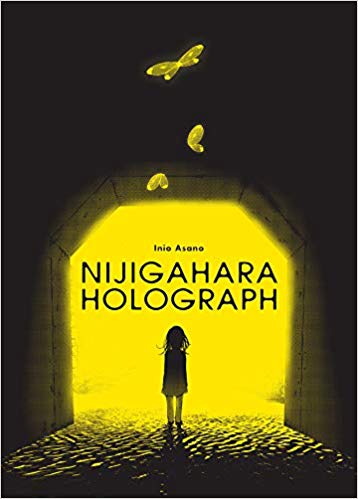 Mangaka Inio Asano has gained quite a large cult following with his ability to deal with various mental health issues that never ostracize his characters. This led a mass mail campaign to the mangaka on ‘World Mental Health Day’ through Viz Media, sending thanks for the artist’s empathetic take on the uncomfortable issue. “Nijihara Holograph” is one of the many examples of Asano’s delicate approach into the subject.

The strength of Asano’s has often rested in building to certain moments of dialogue that reflect a troubled inflection of his subjects. Within the manga, he captures these moments in spite of an experimental delivery in structure. Reading Asano is bound to make a connection with any who have struggled through certain issues, and even when his characters are doing profoundly disturbing things, he still manages to inject an emotional sting that brings a sense of understanding to action. Often these reflections come from children, and although the depth of their words feels heavy for their age, the use of flashbacks almost gives the impression these thoughts are interjected into its subject’s reflections. The result adds a severe degree of tragedy, as often the introspected act of a depressed mind can add an overly grim perspective on the past.

“Nijihara Holigraph” does present some problems within it’s narrative, with this being Inio Asano at his most experimental, the lines of reality are constantly blurred and the story is told through flashbacks and a base story that does not always flow in continuity. This does make the work difficult to approach, and leads to a disjointed comprehension. This can also come down to the characters’ dialogue, as it is sometimes hard to determine what is flight of fantasies or whether the characters are conveying thoughts or beliefs. Their motivations also vary, from an extreme acceptance to the complete destruction of their own identity. Perhaps, the disjointed nature is reflective of the characters own fractured memories, but it does add a degree of difficulty in understanding the end product.

Asano’s visual style, although not wholly original, is unique in his way of conveying emotions and story. Many panels are a single focused shot of the charter’s faces with no text, capturing the silent and withdrawn strength that can occur when faced with overabundant emotions. The manga also favors panels that contain no imagery and just text, again reflective of the extreme emotions posed, as these statements come with the implied statement that they are the sole focus of the character, shutting out all outside stimuli to dwell in overpowering contemplation.

Asano’s cult following is undeniably understandable, as few writers are able to inject so much emotion into every aspect of his creations lives. “Nijigahara Holograph” can be frustrating at times, with the disjointed flow requiring extra attention from the reader. However, it still stands as a testament to Asano’s ability to humanize those often lost to the world through their own mental health, making it essential reading for those who can understand the weight of internal strife.