The mark of a true classic movie is its capacity to transcend time. “A Better Tomorrow” has been in recent years remade in Korea (Watchable) and in China (Surprisingly good!). It has had sequels and entered popular culture albeit not necessarily for the right reasons. 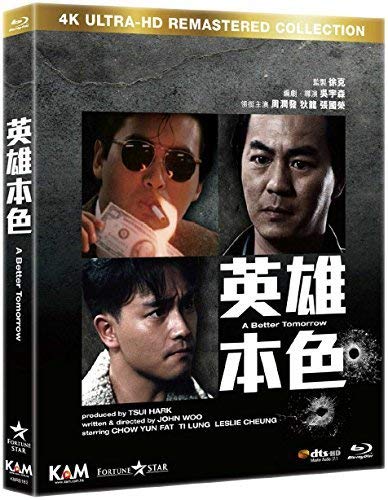 A sudden introduction of Kit (Leslie Cheung) being shot is revealed to be a nightmare before transitioning to a more lighthearted fashion to open the movie. As we see Ho (Ti Lung) and Mark (Chow Yun Fat) initially fooling around before Joseph Koo’s memorable score kicks in as a montage of the money laundering part of their gangland roles is shown, culminating in the first famous image of the movie as Mark burns a freshly produced counterfeit note.

Ho is to go on a visit to Taiwan with underling Shing (Waise Lee) but first goes to see his younger brother Kit graduate as a police officer. Promising his father he will go straight, he sets off. A betrayal culminates in Ho’s arrest and Mark’s crippling after taking revenge.

Upon release, Ho returns to find himself disowned by his brother, Mark now at the bottom of the gangland hierarchy and Shing a ruthless boss angling for the top. Despite a desire to go straight and live an honest life, Ho’s past won’t let go so easily and events spiral towards the epic conclusion.

The history behind this movie has passed onto legend. At the time, John Woo was considered a director of comedy, Chow Yun Fat box-office poison and Ti Lung a fading martial arts star.

John Woo had originally worked under Chang Cheh and the similarities of their themes resonate. The idea of brotherhood is prevalent with both familial (Ho and Kit) and friendship (Ho and Mark). The transition of the idea of heroic knights from martial arts cinema is transposed to a modern setting with these characters and in particular the latter pairing. The notions of honour and loyalty are often discussed.

John Woo had directed an earlier Swordplay movie “Last Hurrah for Chivalry” and to watch both is to see the evolution of his work, with the central characters in the former a clear template for the latter.

Whilst later movies would refine his “style” that would develop his reputation, here is where we first begin to see it emerge. The initial action scene is a by the numbers one but the flower pot scene is when it all comes together.

The combination of fluid editing, slow motion and appropriation of the “Birdy” movie soundtrack as Mark’s theme create one of the most memorable scenes in Hong Kong cinema. As he takes revenge, he leaves the room taking out weaponry from each pot that he had placed earlier as others come after him. If you want to place a particular moment when Chow Yun Fat became the icon of cool then it is here. The scene has been endlessly parodied and ripped off, as in “Bangkok Dangerous” for example. John Woo himself when co-directing with Wu Ma on “Just Heroes” replays this scene, only this time trying to emphasise a less glamorous triad lifestyle.

This is the film’s main criticism in hindsight in that it plays almost as a trial recruitment film. The glamourised notion of loyalty and brotherhood between Armani clad gangsters giving a different appearance to reality, whilst not as bad as the later “Young and Dangerous” series, it cannot be denied.

The only other criticism is the slight jarring moments with Kit and a potential girlfriend (Emily Chu). Hong Kong cinema can often veer off in different directions from one scene to the next but apart from these scenes (watch out for Tsui Hark, the producer in a cameo) the tone is consistent.

T Lung anchors the dramatic weight of the movie and developed a new lease of life career-wise after. Whilst not as showy a role as Mark, it is a strong performance. Chow Yun Fat came into the film with little momentum and left it as a huge star. His charisma is given full reign and steals the movie. Leslie Cheung was at the outset of his career and is fine in the lesser role of Kit but would go onto much better roles as he too became a major star. As Shing, Waise Lee is more restrained than he would be in later villainous roles. Destined to be overshadowed by the other three, he makes for a fine villain and holds his side up well.

This truly is the one that started it all. For John Woo, it led to becoming the best known of the New Wave directors. The cast became major players and it set a template for the “Heroic Bloodshed” genre that followed.

It is and will remain a classic and a landmark moment in Hong Kong Cinema. Watch and enjoy!