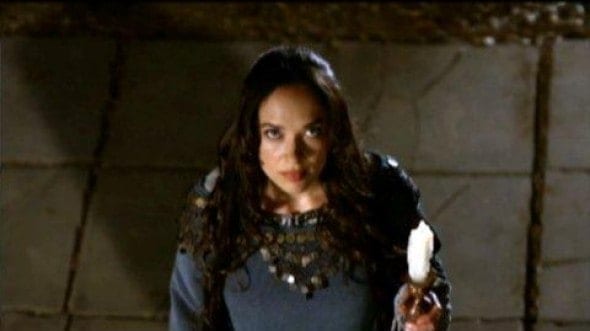 Originally released in 1996, Hideo Nakata scored one of his earliest genre hits with his tale of a ghostly presence disrupting and terrorizing the crew of a horror-film shoot attempting to complete a troubled movie. The original “Don’t Look Up” emerged as a dry-run for Nakata’s next project, the celebrated “Ringu” and featured many of the same elements that would be honed to perfection in that adaptaton. Over a decade later, Fruit Chan took his talents to America to helm this remake with a bevy of then up-and-coming talent, as well as securing the service of producer/actor Eli Roth, to attempt to do justice to this version, even if he misses the mark quite often with his version. 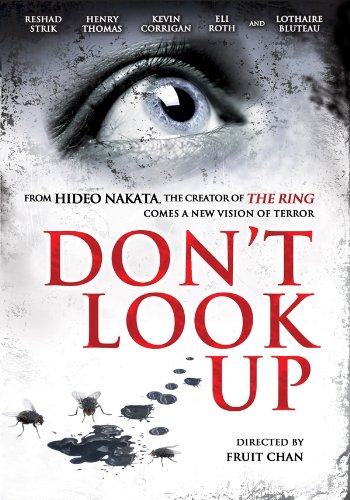 Heading off to Romania, discredited director Marcus Reed (Reshad Strik) and his producer Josh Petri (Henry Thomas) learn of the existence of a long-lost film, helmed by legendary Hungarian director Bela Olt (Eli Roth) that was never finished. Knowing the legend about the film’s history where the director, the cast and the crew vanished with the film that had never been seen before now, he takes a new cast and crew to the same location where the film was originally shot to attempt to finish it. As it commences, they start to notice the series of strange accidents and weird behavior of everyone else, which carries on the closer they get to finish the film. Ultimately, the remaining cast and crew realize that the film is unleashing a curse about the daughter of a gypsy woman who was killed by local villagers, which was the same feat that occurred to the original film shoot, and must try to escape the curses’ wrath before they all succumb to it.

Overall, ‘Don’t Look Up’ was pretty enjoyable if a wholly disappointing effort. This one really tends to get going with the rather enjoyable and exciting back-story detailing the effects of the gypsy curse and revelations about the early film. It’s quite the creepy story that would’ve made for a rather enjoyable movie had it ever been filmed. This makes the filming of these scenes quite enjoyable as there’s a fine sense of atmosphere displayed there during these scenes when looking back at them through the cameras, which makes many of these accidents quite thrilling. From falling lights, broken rigs and failing light-work all conspiring against the crew in a slew of grisly incidents, they come off rather nicely here to carry on the legacy of the curse. In addition to the few startling ghost attacks on the stage-rafters and the ambush down in the basement, these all set up the events of the final half, as the curse comes about, with more deadly accidents. With events taking place in the development lab, a thrilling revelation sequence on the movie set as the replayed events of the original story are enacted and then finally meeting up with the main spirit, these help somewhat against the big flaws here.

Among the biggest flaws in ‘Don’t Look Up’ is the fact that there’s just no end to the rather convoluted and completely meaningless visions Marcus keeps experiencing. The most distressing factor is that these don’t really further the movie at all. Rather than serving as a way to keep going on the filmed movie or even gaining insight into how to defeat the ghostly being stalking around the set, they’re more used to showcase supposedly creepy images and jump-scares. This becomes troubling since those investigative elements are what’s to be expected in this kind of situation, which doesn’t mean much instead as there’s little purpose to the visions. The idea of exploring the connection between the cursed film and the life of the tragic gypsy woman should’ve been a more coherent aspect considering the importance it holds within the storyline, and are simply being there instead to remind us how troubled he is. It also doesn’t help matters that all these scenes do is serve to highlight the film’s next big problem in the uneven pacing.

The uneven pacing is a huge issue as there are so many stretches here where nothing really happens. The filming of the movie and the different backstage interactions with the cast and crew trying to fix the problems with their shoot, play out in very long stretches. As a result, there are times when this one tends to run aground and derail itself by not going for the main storyline, involving the curse on display against the film crew. Since the crew is dealing with their petty problems or utilizing his moronic visions that keep the ghost actually off-screen so long into this one, that its main appearance isn’t until the final battle. That causes some big problems with “Don’t Look Up” in a running-time far longer than necessary as a result due to this overlong padding. That, in itself, is the biggest issue holding this one back, as while the lame CGI for the lone ghost sequence might be another detriment, it’s not as bad compared to these other factors.

With some big issues that really hold down it’s few decent enough positives, “Don’t Look Up” is a bit more watchable than expected but still carries many faults. Really only give this one a shot if you’re a Fruit Chan completist or just curious, while all others really have no need to look at this one.