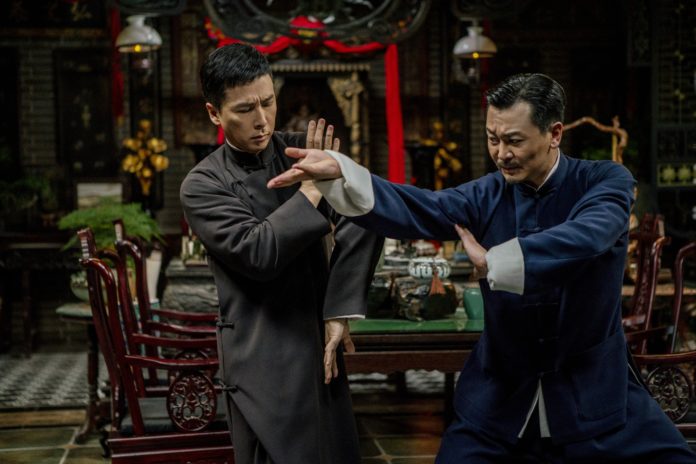 Following the success of the previous entries in the series, it seemed in no doubt that the adventures of the honorable Sifu would carry on for one more round with Donnie Yen at the forefront of the series. Four years since the previous installment was released, the fists and feet fly along with the heroistic image that has been at the forefront of the series in this new film releasing in select theaters on Christmas Day, December 25 from WellGo USA.

Stricken with debilitating news about his cancer, the legendary Ip Man (Donnie Yen) decides the time is right to take to America as a last-ditch effort to find a school for his headstrong son. While there, his former student Bruce Lee (Chan Kwok-chan) has upset many of the local governing entities with his decision to allow outsiders to learn Chinese martial arts. As his teachings have bled over into the local Marine Corps base, Staff Sgt. Hartmnan (Vannes Wu) decides to use the opportunity to bring the teachings into the regiment training, upsetting not only the same community but his superior officer Barton Geddes (Scott Adkins) who views it as beneath his skillset and not worth bothering. As the attempts to push the techniques lead to further political unrest between the two cultures, Ip Man is forced to step in to uphold the virtue of Chinese immigrants in the face of the oppression they’re dealing with at the time.

For the most part, “Ip Man 4” very much feels like the end of an era. From the very beginning, the cancer is discussed as being terminal and irreversible, meaning that there’s a deadline for the entire story to play out. With the attitude from his son also being a major factor as he’s approaching adolescent age and starting to be more defiant and rebellious, the idea of getting him into a school to ensure his education carries on successfully, and manages to provide a fine incentive to the search for a school to raise him. These storyline elements are mixed with the jingoistic nature that takes place between the two cultures that eventually turns into a direct stand against the varying disciples. Making the fight between Chinese martial arts tactics and the military’s training practices to incorporate the two together as a final stand for their way to be accepted in America is very much in keeping with the spirit and tone of the series and adds to the sense of finality that accompanies the film.

On top of all that, the storyline from writers Leung Lai-yin and Chan Tai-lee is quite fun and well-detailed. The idea of bringing everything together in a historical context to the real-life events that were happening in the world at the time this takes place is an impressive feat. Talking about the controversial nature of Bruce Lee’s decision to teach long-secretive native martial arts techniques to foreigners adds a rather immersive retrospective to the real events that were happening in the world at that time. There’s a fine added touch with these mixed with the bias against their way of life that gets brought up throughout the film. This is from the dismissal of their culture simply by being foreigners and favoring the US-based fighting techniques that are seen as superior. Geddes’ comments about the fighting styles between the two being so outgoingly racist do setup his downfall rather easily, which carries far less emotional baggage due to that but it doesn’t detract from the sense of pride that comes along as a result.

That the martial arts on display follow suit gives “Ip Man 4” plenty of enjoyable, hard-hitting action. Choreographer Yuen Woo-ping tends to utilize far more realistic action setpieces than previously, relying on combat practices in real-world situations that aren’t about the fanciful moveset but more practical defense and overcoming of the opponent. The fights here are blisteringly fast and exceptionally hard-hitting as a result, from Bruce’s demonstration with the oppressive fighters in the alleyway to the hand-to-hand techniques that Ip Man and the fellow master go through in the study that’s eventually interrupted by the Earthquake. The finale meets the usual standard for the series with a series of frenzied, thrilling encounters that are highly enjoyable, full of impressive moves and plenty of uplifting action that matches the emotional heft of the other storylines. Overall, there’s quite a lot to like with the film.

A fine and fitting end to the franchise, “Ip Man 4” carries an emotional depth that matches the blistering action that’s been at the center of the series from the beginning, making this a solid sendoff in many ways. The film is certainly worthwhile for any fans of martial arts efforts or those who’ve enjoyed the series thus far, while only those viewers turned off by the subject matter won’t find much here.