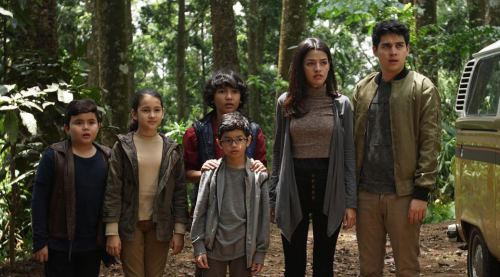 After the success of the previous entry, prolific genre director Rizal Mantovani and star Sandrinne Michelle returned less than a year later with the rest of the adapted brothers and sisters to continue the saga in a new sequel effort. Expanding on the legend of the vengeful vampire ghost Kuntilanak that was incorporated in the first effort with hints of fairy-tale elements including “Hansel and Gretel” and other children’s stories, this new sequel wasn’t as big a hit as expected, but still offers some worthwhile elements.

Following their escape from the ghost, Kresna (Andryan Bima), Miko (Ali Fikry), Panji (Adiu Fahrezi) and Ambar (Ciara Nadine Brosnan) try to put their past behind them as they stay with Dinda (Sandrinna Michelle), their older sister. When she receives news that her biological mother named Karmilla (Karina Suwandhi) has contacted her and wants to meet up, against her aunt’s wishes they head off to a remote section of the jungle to go looking for her with Dinda’s boyfriend Edwin (Maxime Boulttier) in tow. As they attempt to reconnect with each other, it soon becomes apparent that the deadly Kuntilanak they faced before isn’t finished with trying to abduct the children, and forces them to band together once again in order to fend off the vicious spirit and her evil plans.

Overall, “Kuntilanak 2” is a fine-enough if decidedly lowered sequel. One of the strongest aspects here is the strength it shows in the characters that are carried over from the original. The bond between the kids that started in the first one where they grew from pranking each other and splitting off into separate groups before banding together to defeat the ghost is still here. From the panic and concern over looking for the lost sibling at the carnival, to the kids all singing along together, the film feels rather strong in showing how their past affected them and brought them genuinely closer together. This helps to add a touch of terror to the film as we start to get an eerie feeling with the way Karmilla attaches herself to Kresna while they visit, with the sinister way she keeps trying to hold onto her or the glances thrown when they’re not looking. It becomes much creepier once the truth is revealed about the situation and the scares become more personal, knowing that something’s wrong to the characters, especially small children like them.

On top of that, “Kuntilanak 2” generates a lot to like with its ghostly haunting sequences. The switch from the remote house from the first one to being out in the woods adds a definite fairy-tale atmosphere to the proceedings, offering a lush green atmosphere and quiet eeriness that goes together nicely. The hidden shacks and overgrown plants seen around the property complete the story along with a gothic feel to the scenes inside the house that shouldn’t look that cozy from the outside. As the darker subject matter comes into focus with the eerie whispers and the appearances of the spirits interacting with the group, the scares become quite enjoyable when the film goes into the frantic final half, which adds more to the fairy tale inspiration, knowing that the children are still in danger. Featuring several chilling encounters with the Kuntilanak ghost throughout the house and surrounding woods, as well as a trip to a disturbing carnival full of trapped souls, there’s enough to like with this film.

There are some problems with “Kuntilanak 2.” The biggest obstacle here is the film’s storyline from writer Alim Sudio that adds unnecessary elements and characters that pad out the running time. That this one is longer than the original shouldn’t be so, as the different scenes of the kids running around the forest or the endless conversations between Dinda and Karmilla end up adding nothing, beyond extending the length. That focus on not making the central reason for them visiting in Dinda reconnecting with Karmilla her supposed birth mother a bigger priority, makes for a slipshod storyline here. This was the entire reasoning why they ventured out into the middle of the woods to meet up, yet it simply feels hollow without any kind of care or attention to it. This results in nearly an hour going by without the appearance of the ghost or even revealing it’s true plans, as the padding becomes most apparent that the film has run on far too long with these bland scenes. Likewise, with an overlong, CGI-heavy finale that doesn’t know when to quit piling on, due to the continuous tacking on of battles with the ghost, these here cause the film to run on too long.

Being a wholly watchable sequel with some flaws in a jumbled narrative and way too bland pacing, “Kuntilanak 2” features enough to like about it even though it’s a lower-tier film from the original. Give this a shot if you’re a fan of the first one and want to continue the story or an undiscerning Asian horror fanatic, while those viewers that are turned off by the flaws or don’t enjoy this style won’t find much to this one.

Film Review: In the Absence of the Sun (2014) by Lucky Kuswandi